In pioneer days did the Wild West miss eastern Washington? There were no rootin' tootin' shoot-em-up towns around here. Last Tuesday, Charley Farmer from the coast stopped in. He thought I knew lots of tall tales of early day shoot-outs. Sure there were spot incidents. There were worthless stiffs around then; the same as there are now. The abundance of horses back then bred more horse thieves. As far as I know, there were no groups of Indians in Lincoln county that got mad enough to whip out their bows and arrows to punch holes in early day settlers.

Charley was especially interested in the Harry Tracy story. It looks like Tracy’s rock out in Cole’s pasture is fast becoming a historical landmark. For the second time in a row, a busload of curiosity seekers, and criminal buffs journeyed to ‘the rock.’ Again, they were given a guided tour of Mr. Tracy’s closing hours of life. We repeaters are beginning to respect ‘the rock’ for its isolated beauty, instead of its shootin’ records. The only respect that Tracy had for ‘the rock’ was to use it to stop the bullets that were traveling his way. 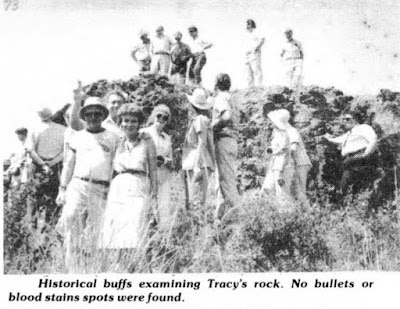