Spread Evenly by the Contented Cows

Every community in Lincoln County had their early progressive settlers. West of Davenport was no exception. There were at least a dozen old timers that were eligible for the ‘Pioneer Farmer of the Century Award.’ There would have been more, but a lot of ambitious settlers decided to settle for large families instead of indulging in the luxury of self improvements.

Others, like George Sweezy, never had a chance. He was a highly educated farmer in his time. George had ideas that needed capital investments. Most farmers didn’t go along with his enlightened ideas, because they couldn’t see farther than the end of their noses. A good leader, George always kept his cool and could figure things out in a reasonable way. He had great ability to improve his lot in life but the thin layer of soil on his Rocklyn farm couldn’t support his advanced improvements.

And so goes the list of sharp old timers that missed the boat slightly. However, there is reason to believe that the outgrowth from the pioneer Maurer stock contributed to the genius of one Mike Maurer. I’m sure Mike would have beat out any present day ‘farmer of the year,’ simply because he was ahead of his time. His farm was the show place of Rocklyn.

Blunt, and sometimes noisy when he got wound up, Mike was a friendly guy. An ardent reader of current events, Maurer and George Sweezy organized the Literary Society. It helped educate the surrounding neighbors who usually depended only on a small weekly German newspaper, and some Sunday School literature. Mike’s discussions always added food for thought, whether it be politics, religion, or methods of farming.

Dad and Mike Maurer were brother-in-laws. When they got together, ninety percent of their time was spent arguing. Usually they were very uncomfortable if they could not find something to argue about. Mike had the advantage over Dad, because he was well versed in many subjects. Dad had to rely on common sense to outsmart him.

From 1900 to 1920, any traveler passing by the M. F. Maurer farm in late summer would think they were in Iowa. Acres of mule high corn stretched out along the roadside for over a half mile. A large round silo stood taller than the typical red barn, with milking sheds attached to it. Fenced in, corn fed hogs graced one side of Mike’s spread out farmstead. Scads of Holstein cows enjoyed chewing on 150 acres of juicy, ankle high winter wheat. Acres of experimental field peas were waiting to be hauled to a special thrashing place. In between all this scenery, was lots of red chaff Gold Coin wheat. It gave the Maurer farm the right summertime touch of color it needed to remind the passer by that he was in Washington, not Iowa.

Mike had several farm systems figured out that were years in advance. One of his successful operations was August seeded winter wheat, and a Holstein cow combination. The cows feasted on the excessive plant growth. Their full stomachs supplied droppings that were spread evenly by the contented cows, producing natural fertilizer. When the wheat plants received enough punishment from all that chewing, the cows were kicked out of the growing wheat, and put on a diet of sweet corn silage. Crops harvested from Maurer’s double duty fields, produced more for the warehouse than his other ‘seed it and reap it’ fields. 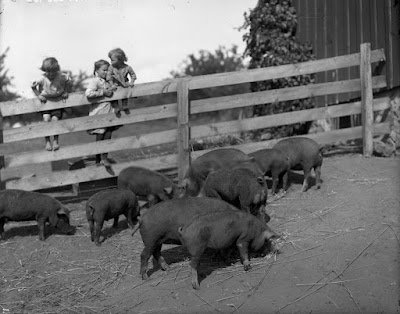 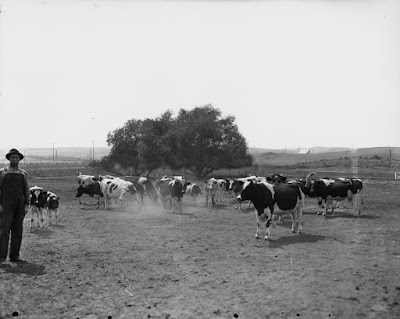