Without Any Time-Out for a Brother

This golden anniversary event made a guy realize that things were different 50 years ago when Bud and Beulah took their vows to live a married life. Did couples get married with all the wedding bell trimmings in those days? No, not that I know of. These big deal weddings didn’t get started ’til after Adolph Hitler’s defeat. It wasn’t until then that daddies could afford to put on a show for their departing daughters. Neither were the country boys able to flash through their home towns in a sport car looking for a date to date.
When Beulah and Bud decided to get married, all they did was to get in touch with preacher Kroneman who had a parish and a church down the street a ways. They had him come over to Beulah’s family home where he tied the marriage knot.
To zoom in on Bud’s bride of fifty years, one has to go back to an old established wheat ranch in the Rocklyn area. Beulah is the youngest of Charley and Julia Rux’s string of daughters. They all arrived in orderly fashion without any time-out for a brother. Mabel, Aileen, Bessie, and finally Beulah. In fact, it was sort of luck that Beulah made it.
Her dad wanted a son so bad that when word reached him out in the harvest field that his wife gave birth to another girl, (Bessie) he was so disappointed that he refused to go home. It took three days before Charley felt like leaving his custom thrashing crew to go see daughter number three. Charley and his wife again tried for a boy, but Beulah arrived instead.
Charley made the best of his all girl family. They grew up healthy like, and helped supply a more equal ratio between the boys and the skimpy girl population. Later Beulah carried out the same family tradition by having just four girls, too. 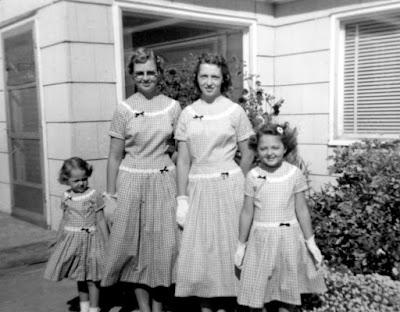 "...carried out the same family tradition by having just four girls, too."
Photo - Melanie Sperry 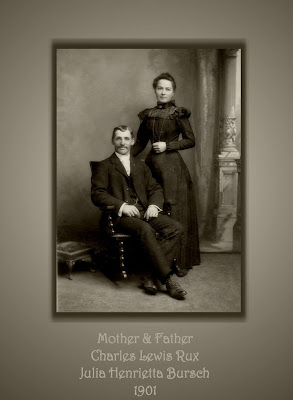 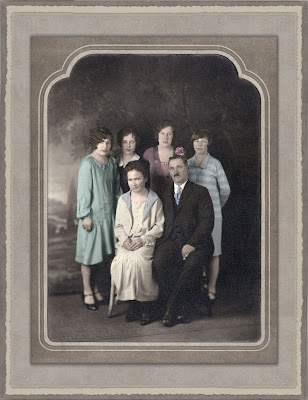 The Rux Family - 1930
Photo - Melanie Sperry
From the May 3, 1901 edition of the Lincoln County Times:
Charles Rux and Miss Julia Bursch, of Rocklyn, were united in marriage by Rev. Joseph Hepp, on Thursday, April 25th, at the latter’s residence, only one or two immediate friends being present. Mr. Rux is one of the solid young German farmers of the Rocklyn community, and his young bride is a neighbor girl of equal worth. 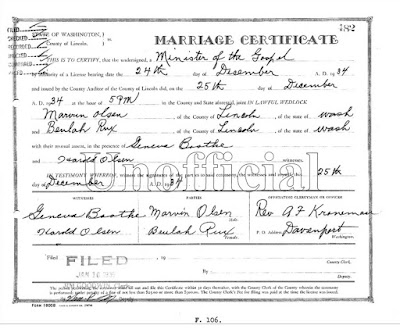 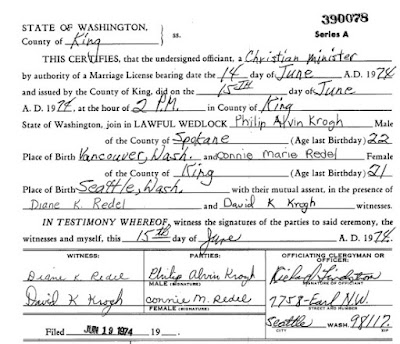 Our marriage Certificate from 1974
I don't know why I wrote that I was from Spokane County except we had just gotten a job in Espanola, Spokane County. I wish I had written Mason County (Shelton).
A Wedding Toast from me to our oldest daughter - 2003

Kirstin is the artist in our family.  I used to be the “artist in the family” when I was young. I would draw a picture of a boa constrictor that had swallowed an elephant. Boa constrictors, as you may know, swallow their prey whole. But everyone I showed my drawing to thought was it was a drawing of a hat. So I gave up art and became a pilot until I crashed one day in the Sahara Desert. No, wait…that wasn’t me…that was the French pilot and author Saint Exupery when he met the little prince. He was in the middle of the desert trying to fix his airplane when out of nowhere he heard a voice that said “If you please...draw me a sheep”.

If you please….draw me a sheep. The little prince needed a sheep to eat the invasive plants that threatened to destroy his tiny planet, Asteroid B3382. On his planet was a flower, a rose that he believed was the most beautiful and unique thing in the whole universe. But the little prince had run away from her. He did not know how to cope with her vanity and her lies. He did not understand her.

If you please …draw me a sheep. While he was on Earth, the little prince came across a flower bed of a hundred roses. And all were just as beautiful as his rose. He thought his flower was unique, the only rose in the whole universe. Now he doubted that his rose special at all. He threw himself on the ground and wept. Our relationships with our significant others begin when we are attracted to beautiful qualities in each other. Eventually some of our beauty fades, but by and large, we stay together. Does our faithfulness really have anything to do with the promises and vows we make on a day like today?

If you please …draw me a sheep. The little prince’s urgent desire for a sheep showed he deeply regretted leaving his planet, his rose. He had learned why his rose was special, what made his rose different from all other roses. It was because she was his rose. She was his rose that he watered. She was his rose that he cared for. It was the time he wasted with his flower that made his flower so important. It is the time that we waste in our relationships that make them so important to us. The time we waste with our husbands and our wives. The time we waste with our our children. And even our pets.

If you please…draw me a sheep. The little prince was returning home to his planet with drawing, his sheep. The pilot could not bear the thought of him leaving. The little prince had become his only true friend, the only person who truly understood him and the only person who had ever correctly identified his drawing of the boa constrictor. Today Kirstin is leaving me. She has gotten married and is moving across the country. The “across the country” part is a small thing. The “getting married” part is…well, it seems like a million miles, like the distance to Asteroid B3382. But it’s a good thing. And because of Scott – it’s a great thing. We did not lose her all at once, most things happen gradually. We started losing her the very first day she walked to school all by herself. And today that loss was completed in a very significant ceremony.

If you please…draw me a sheep. Before the little prince left, he gave the pilot a gift. He showed him how his laugh was like the twinkling of millions of stars in the night sky, so whenever the pilot looked up at night it would remind him of his friend and ease the void in his heart. I do not need a gift, I have all this, everything that happened here today to remind me. But I will ask for one, a small gift. (I hold a pencil and paper out of to her.) Kirstin…if you please…draw me a sheep?