That Long Wait...Brought Me Sugar

The Rocklyn district at one time had three one-room schoolhouses. They were scattered all around so the kids wouldn’t have to take all forenoon to get there. Two of Beulah’s sisters, Bessie and Aileen, became school marms and taught in two of Rocklyn’s schools. Country preacher, H.B. Mann, taught in the stricter Rocklyn school that had a church nearby.

Two of the Rux sisters rode horses to the main Rocklyn schoolhouse. Bessie was the teacher, and little Beulah was one of her pupils. Beulah and her scattering of school mates were the last of the Rocklynites to attend this one room country school.

When Beulah entered her last years of schooling in Davenport, it seemed like Bud was waiting for her. They became high school sweethearts. Lots of Sundays were spent socializing with local couples that had matrimonial intentions on their minds. After some simple outings that those depression days had to offer, Beulah and Bud made a decision to try for a long married life.

That same year, seven other local couples took up marriage vows. It nearly wiped out all the singles. It left only me, and a handful of others that couldn’t get it altogether. However, that long wait of five years brought Sugar. 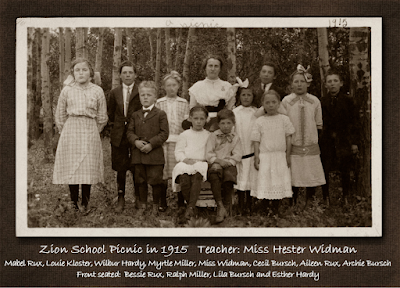 The Rux Homestead / OurGreatEscape.ca
Excerpts from "Our Great Escape"

Editor’s Note: The Rux homestead is on private property. The owner, whom you can learn more about in the comments section, has posted No Trespassing signs. Jerry is a great guy and more than willing to cooperate with photographers, provided they seek permission.

*********
It was moody.
Gloomy.
And as I poked around, taking only pictures, I felt a sadness.
A sadness that such a beautiful sat empty, a little bit weathered by time, a lot bit damaged by vandalism.
As it turns out, Rocklyn used to be a bustling burb.
A little bit west and a little bit south of Davenport, it was more than a stretch of paved road dotted with abandoned homesteads.
One obituary revealed it had a gun club and a car club, neither of which are in existence today.
It had a mercantile, a post office and a school.
All long gone.
The man who built the home that captured my imagination. [Carl Rux]
*********
I can’t find who bought the farm in 1928 and why the beautiful home is left to rot in the harsh sunlight under which wheat fields thrive. But it is rugged, like the families that homesteaded the area, and leaves their legacy to stand the test of time. And now that I’ve dug myself back out of the Rocklyn rabbit hole, it’s time to find another one and learn more about the people that made Eastern Washington happen.
*********

Thank you for your interest in my Rux place homestead and the research you did to write your comments. I have mixed emotions about photographers and/or authors that ignore my No Trespassing signs I posted on about every other power pole and cannot take the time to ask permission to view the property. I have information that would have answered your questions as I plan to restore the homestead and the red and white school houses when time and money permit. I am on Facebook with pictures, photo albums and commentary. Have a nice day. Jerry Hardy

Reply Melanie (Olsen) Sperry Melanie (Olsen) Sperrysays: April 2, 2016 at 2:04 pm Thank you for this very nice article and pictures of the Charles & Julia Rux homestead. I’m one of their granddaughters, born to their youngest child, Beulah. My Mom had so many wonderful memories of growing up on the farm. Julia became an invalid when Beulah was 3 years old. Her older sisters, Mabel (16), Aileen (12) & Bessie (11) took over caring for Julia, the household and raising their little sister. It was hard for Charles to maintain a farm with an invalid wife, 4 girls and no sons to help with the farm work. He sold the homestead to his neighbor, Wilbur Hardy and moved into Davenport where he used his carpentry skills to make a living. The farm had tenants over the years. Wilbur’s brother, Bob Hardy & family, lived there a number of years. Aileen’s son, Jerry Kruger & family, also lived there for a short time. Jerry said it was one of the coldest winters they ever spent as the old pioneer house didn’t have insulation! Yes, it’s sad to see old homesteads abandoned, but it is the cycle of life. They are a slice of history and when we see them, we imagine how brave it was for young men and women to leave their families behind to build a life on a piece of land abundant with sagebrush and rock. They had to be skilled to build a houses and barns, farm the land with a team of horses, raise a family and still have time to worship with their neighbors and help each other out. Rocklyn was and still is a wonderful, close-knit community of friends and relatives.