In 1881, when one of Barney Fitzpatrick's sons, Ben, was 16-years-old, he was allowed to help with a cattle drive that ended at Omaha, Nebraska. Nearly 2,000 head of Barney’s steers left this area and when they got to eastern Oregon other cattlemen joined in on the drive, raising the number of steers to well over 5,000. It was over two months before Ben and the other cowboys got back to Davenport. I was told there was a second cattle drive, but I never remembered Ben telling of it.

Later, Barney signed a contract to supply all the meat for Fort Spokane. About this time, Spokane started taking all of Fitzpatrick’s cattle. On one particular cattle drive to Spokane, Ben was put in charge. Fences started to appear, making this drive a hard one. It was a hot and dusty time of year, so when the cowpokes got north of the old Hazelwood dairy, they began boozing it up.

The gang managed to get the cattle across the first bridge north of Spokane. Ben then made an uncontested decision to show Spokane a real cattle drive. The herd was pressed so hard, they decided to get scared and created a stampede. The old wooden Monroe Street Bridge shook like all get out, scaring the cattle to the point where they forgot to stop until they thundered all over downtown Spokane.

It was the next day before Spokane County sheriffs got the cattle rounded up and driven to the stockyards. A day passed before the authorities found out who owned the cattle. Why? That’s simple. When Ben and the gang saw what happened, they tied up their ponies and got lost in a couple of the many saloons that were in Spokane at that time.

Ben didn’t go home for over a month. He knew his dad was a very strict, disciplinary fellow. Of course, on the other hand, there were a lot of naughty things those cowboys could do in Spokane--there were women and other attractions.

Barney, Ben’s dad, stood for no nonsense. He did not approve of wild cattle drives through any town. Ben forever lost the good graces of his dad, to the point of getting only one buck when the old man cashed in. While his brothers went on to higher goals in life, Ben was kind of slip-sliding around, enjoying himself. He was quite a lady charmer, but never got tied up with one. 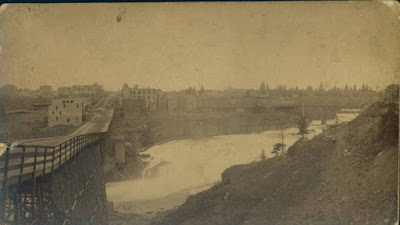