Lincoln County was born on Dec. 18, 1882. Arrangements were made with Barney to use a building that he owned in Davenport for the county officers who were appointed by the new commissioners. I’ve been informed by reliable sources that old Barney donated a large amount of money for the building of the present courthouse.

An article in the local paper explained how guys like Fitzpatrick in the Northwest had their cattle frozen stiff one winter, leaving only a few for seed. The Lincoln County Times, dated March 7, 1890, read as follows:

“Continual storms and severe weather have put an end to all hopes of cattlemen and the losses among the range cattle and horses amounted almost to annihilation. A loss of 90% is not too high an estimate.

“We hear the most distressing accounts of losses from men, who last fall were considered well to do and are today bankrupt. One incident is told of a small cattle owner whose feed was exhausted before the last big storm. He could not witness the suffering of his animals. They were all driven into a canyon and there left to perish.

“The country west of Davenport is strewn with dead animals found in bunches of one half dozen or more, as if the poor creatures had crowded together for warmth. Their bleaching bones will long remain sad reminders of this terrible winter. The effects of the season on cattle has conclusively proved one thing, and that is the range in this section has become too limited for large bands of stock to roam at will.”

During that “gosh-awful” winter, Barney had to endure some physical pain too. He got caught in one of those 1890 blizzards while he was horsing around at Deep Creek. Realizing that the blockade would last for sometime, he struck out for home on horseback.

There were only a few scattered houses over the trail traveled by him, but he managed to reach one every night. He was six days in making the trip. The snow was soft and so deep that Barney had to break a path for his horse, and when he succeeded in reaching his home, he was totally “pooped.”

As time passed, I guess Barney didn’t feel too poorly about being reduced to a “little shot,” because when 1892 arrived, open range grazing had already gone out of style. That year a mass meeting of cattlemen was held at Fellow’s Station (Telford) to organize the Lincoln County Stock Protective Association. They made a resolution that it was a no-no to drive or graze cattle through Lincoln County. A word to the wise was sufficient. 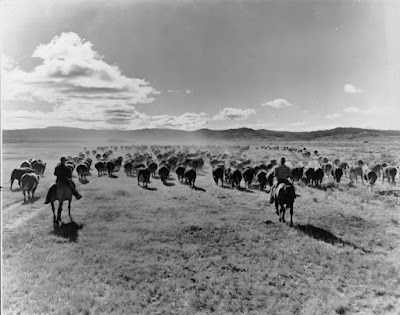 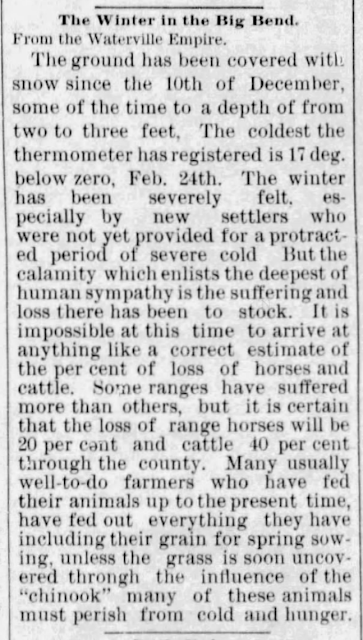