Now let’s close our eyes and imagine a solid, endless spread of waving bunch grass between Davenport and somewhere in Nevada. That’s what Barney Fitzpatrick saw in 1871, on his way up from a scouting trip that landed him where Davenport now sits. He followed the Cottonwood stream for five miles west, where another creek joined in. Against a hillside was a bubbling spring pouring forth loads of pure water. Barney then hightailed it back to the Federal Land Office, and filed a homestead claim on that spot. He then sat on his horse all the way back to Nevada.

In the spring of 1872, Barney found a young cowboy to drive his 51 head of cattle up from Nevada. The cowpoke was Ben Hurley, a well known early settler in the Creston area.

Barney’s wagonload, besides his wife, included a bunch of children. Child number one was Jim Fitzpatrick, who grew up to build the Union Iron Works in Spokane. At the time of Jim’s death, he was the wealthiest man to die in that berg.

Child number two, was Richard. He made a name for himself by turning into an itinerant medical doctor. Number three was Ben, who grew up to be a typical northwest cowboy who knew every pothole and creek in this large and open territory. Child number four was Margaret who became quite an artist. Sugar and I saw some of her scenic paintings in Portland.

Now, for getting that Fitzpatrick family up to west of Davenport. The cattle were either herded across the Snake River or loaded on the Lyon’s Ferry. After arriving at his homestead, Barney did have time before winter to build a log house. In a few years, his cattle empire grew until it reached the 8,000 mark.

Barney and Portuguese Joe’s cattle did chew up nearly all the bunch grass between Davenport and Coulee City. They must have stayed south of Wilbur, as I believe Wild Goose Bill would have raised hell. Many a young cowboy had a year around job herding Barney’s cattle as far west as Moses Coulee. 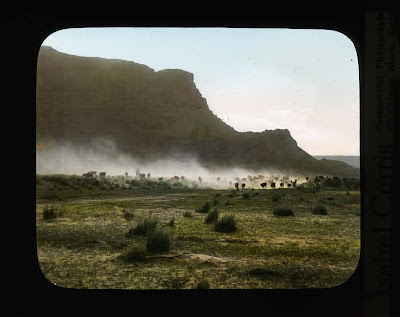 Then and Now - Steamboat Rock 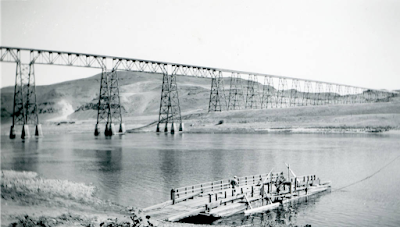 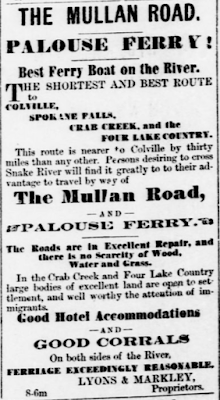