Sort of Choked Us Guys Up

Waiting for spring was something Bandy didn’t seem to mind. Shoving straw down from a boxed-in strawstack for all the horses to eat was the usual winter chore. Some afternoons found him repairing harnesses. Rivets, a punch and some splicing leather was all he needed. The overhaul was completed when a coat of linseed oil was applied to the harnesses.

Like everyone, Bandy never liked the idea of not feeling well. When he developed pains in his arm and shoulder, doctors told him his heart wasn’t so hot. He didn’t like that kind of verdict, so he found a doctor that said he had pleurisy. This made him happy.

The last chapter in Bandy’s life came in the spring of 1934 when times were still tough. The Federal Government went in cahoots with the State Department to widen the road east and west from the Rocklyn corner. This included hiring some W.P.A. workers. Several farmers that couldn’t hack it through the Depression got jobs driving Holt 60 Cats. Bandy, with his pet team, was hired to do things the Cats couldn't do. Broke guys on W.P.A. hacked away, trimming up the roughly torn sidebanks. A combination of the steel age, the horse age, and the stone age.

One night after driving his nags up and down the construction road all day, Bandy went to the bunk house rather early. The next morning, Bandy’s bed-partner, Warren Hess, had to take over Bandy’s job of shutting off the alarm clock, because the weary horse skinner’s heart stopped working. Ed Young, a fellow bunk-house resident, and Warren tore across the yard to tell the Magins the shocking news.

Thankfully, with scads of tractors moving in, Bandy never had to witness the sad decline of the horse infected world that he loved so dearly. The pride and skill this old fellow possessed in handling an array of horses from the driver’s seat, was a big deal with him. Seeing Bandy’s sagging brimmed hat hanging on the bunk-house nail, and his hand shaped leather gloves laying against the wall on a small table, sort of choked us guys up. It gave one a haunted feeling of his presence, ’til his few personal things were carted off. 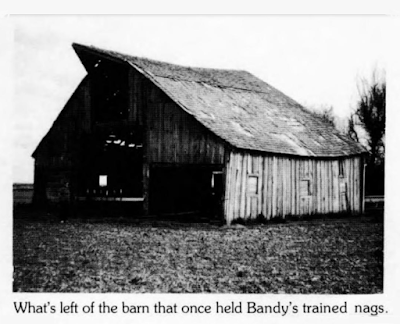 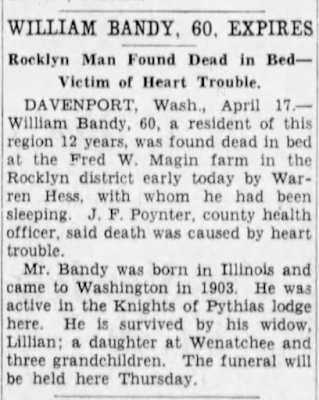