Dug Into His Inheritance Bag

How did [Superior Court Judge] William Nevins get started in life? Well, the first thing he did when he turned into a man was to serve two years in the army during the Spanish American War. Upon coming west from Iowa, Nevins worked on a stock ranch, and homesteaded in the Odessa area. He also taught school at Bluestem and around Odessa.

Deciding to get smarter, Nevins got a hold of more education, so he could become a lawyer. This path eventually lead him to become our judge for Lincoln County. He served from 1928 to 1944. Then he slipped back in as judge from 1952 to 1956.

All those years of Judge Nevin’s wage earnings made him grow heavily in monetary value. He didn’t have a family to raise, and his Dodge Victory Six didn’t cost him much to run because he changed the oil at the correct time. The judge just simply piled up a lot of dough!

The Veterans of Foreign Wars figured it would be an honor to have his honor become a member of their organization as a representative of the Spanish-American War. To get the judge interested, they paid his membership dues.

This so pleased his honor that he left this veteran group a good size slice of his inheritance. That organization is now able to perform civic projects from the Nevins fund. Though he was not a religious guy, he left a good size chunk of his left over dough when he died to the four main churches in Davenport. Wherever the judge landed after his retirement, he dug into his inheritance bag a little deeper. A nursing home and the Odessa hospital were remembered very well by this reserved bachelor. 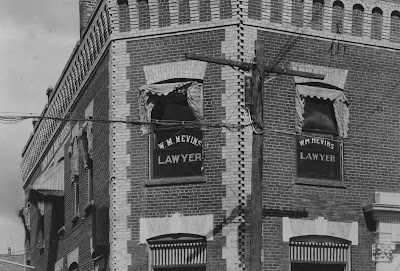 "...so he could become a lawyer."
Union State Bank Block, Odessa, Washington State 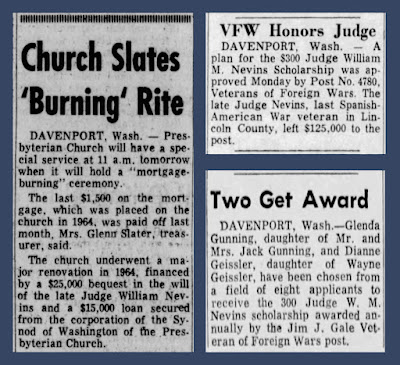 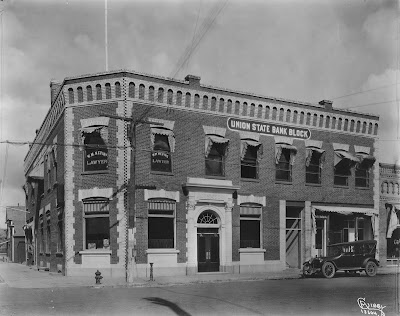