Age Put George on the Shelf

George’s boss, Jack, had a prized jackass that helped make the mule population grow. George loved to work with mules. He soon became known as the best mule skinner north of Harrington. For years, running the farm without George was a no-no. When the Adams estate was in limbo, George took over the farm operations, and also cared for a pasture full of cattle.

With his boss gone to his reward, George soon left for the tall timber of Lincoln County. Milton Reinbold told me that George found employment on his dad’s farm. The family also found him to be a good worker, [and] a nice and gentle person. “He never lost his temper,” Milton said. After five years with the Reinbolds, age put George on the shelf.

Retirement found George living in an old house down at Miles. He was a guy that never let money get piled very high. When his welfare check arrived, he would take a short walk to a small store, and treat all his friends that were standing around to some beer. Before returning to his little old house, George would lay in a supply of victuals that would last him ’til his next life sustaining check arrived.

Before George’s death, Dad wanted to be taken down to Miles for a visit with his old Lake Creek pal. Rattling George’s half open door brought silence, so we walked in. Windows were scarce in the old unpainted room, making it hard to find dad’s old friend. We finally found him snoozing in a rocking chair next to a blackened stove. His response was slow, but he recognized Dad. He answered our questions with a smile. But it disturbed Dad, as he was just a shell of his former self. About a year later, George was buried in a pauper’s grave in Davenport. 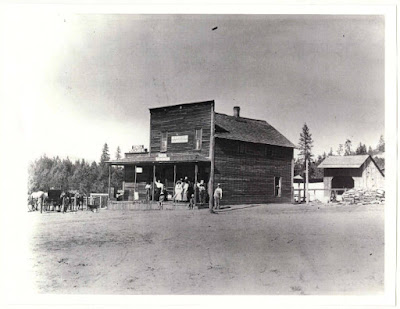