For the Love of His Horse and Saddle

During the turn of the century, there lived a guy in his twenties that made his home where he could find an outdoor job. His circle of operations was around the Harrington country. He answered by the name of ‘Speedball,’ but letters he had written arrived under the name of Wes McCann. I guess Speedball could have been called a cowboy by trade. He really was no speed-ball, and usually would end up breaking even financially by the end of the year.

How did Speedball get started accumulating what earthly possessions he ever owned? Well, his makeup left him wide open for a shrewd guy and horse trader like Willis Thorp, who migrated up to the Lake Creek country from Ellensburg. He had a string of Ben Snipe’s ancestral ponies with him. Snipe at one time was a well known early day cattleman and all around big shot. Any of Snipe’s riding stock whether real or fraud, usually brought a premium price.

Before hiring Speedball to herd his saleable horses in all that lush Lake Creek grass, Willis sold him a high priced horse that had some of Ben Snipe’s breeding stock flowing in its veins. Also, a used hand stamped saddle that saw many a cowboy’s fanny and a fiddle that was supposed to have been made out of a special kind of wood. Willis also threw in a couple of personally conducted violin lessons.

My dad told me that Speedball did his job best when the job required his horse. He ate, lived, and slept for the love of his horse and saddle. In fact he once dreamed that his saddle was stolen. After that nightmare, Speedball almost became obsessed that someone would steal his fancy riding seat.

Horse trader, Willis Thorp, had Speedball sewed up for over a year as his 'boy Friday' by selling all this stuff to him on credit. Not only that, Speedball had to use his debt ridden horse and saddle for his daily horse-riding chore for Willis. He did, however, get all the sour dough biscuits and bacon he could eat. Mr. Thorp and Speed-ball made their headquarters at the Kik Brothers ranch. 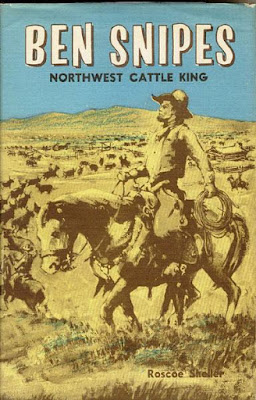