Made to Order For Christmas Day

The winter of 1931 was [a] snowy one with drifts and lots of cold air. It was made to order for Christimas day. At that time, Bill Chappell, a bachelor who lost his farm at the beginning of the depression, settled for an old abandoned grainery to live in. Bill didn’t ever win any awards from the sanitation department. However, he was finicky about what he liked to eat. On Christmas Day neighbor Cecy Magin and mother pooled their resources from the left over dinner and had it delivered to old man Chappell. The next day the report came back from Magin’s hired man that Bill went all out for Cecy’s Washington nut pie, but he fed Mom’s pumpkin pie and the dressing to his chickens!

Much more recently another old guy that used to live at Coulee Dam never celebrated the holidays. Instead, during the winter he wrote this short poem, titled: “My Cabin Retreat”.

When the stars shine bright and the moon looks old,

And the long dark nights are icy cold;

When the snowbanks reach an awesome height,

And the coyotes howl in the dead of night;

When the rabbit’s white, the bear is asleep.

Then I cuddle down in my cabin warm

And enjoy the song of the bitter storm."

In the midst of winter storms, I like to think back to: THE NEW YEAR, by Kenneth Patton:

“The days of the year have stiffened in ice, and darkness has grown upon the land. But men approached the shortened days with gladness, and the ancient fear is no longer on their faces. The frozen soil is no enduring danger, and the heavy death upon the earth is no lasting peril. Now the sun will again climb the sky and henceforth the darkness will be pushed back each day. And the months of snow will give way to months of leaves, and petals will fall upon the earth. Men will walk upon the greening grass, and their plowshares will divide the warming soil.” 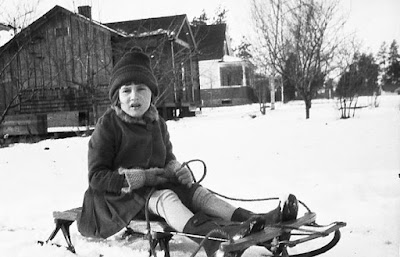 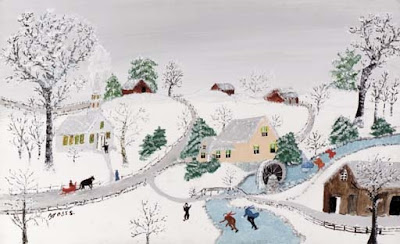 Grandma Moses
Kenneth L. Patton: A Citizen of the Universe