If I Am a Threat to Anyone

Sugar was a softy, she voted for Carter. I couldn’t, but that ex-movie actor didn’t get my vote either. Jerry Falwell’s Moral Majority targeted in on [George] McGovern and [Frank] Church. It helped destroy both of them. It made me cry. One can understand why the Moral Majority gave Church the axe. His son is a Unitarian minister, but why McGovern? He represents all the good parts of Christian living.

All this reminds me that our farming community is more or less founded on Christian principals. It’s very simple to follow status-quo. Down deep, everyone does have a close kinship for each other, and it would stay that way, regardless of who strays away from the traditional path that gets a little too narrow for some of us to follow. The “moral majority” should include every religion that has been manufactured, whether the path is wide or narrow.

Some of us can walk away from our inherited religion. That’s why I have “fallen from grace” in the eyes of the fundamentalists. Questions I hear: “Hey, I heard you have withdrawn from the Christian faith.” Usually, the question isn’t put that simple. One can’t do justice in a short conversation without getting the feeling of being ridiculed. If I am a threat to anyone, then their faith must be very weak, or they are in doubt themselves.

A decade ago, at an annual relative birthday party collision of the minds took place when those concerned folks found out that Sugar and I were going to the Unitarian Church. We make it through the “happy birthday” song without a note of discord. Even made it safely through the candle blowing ceremony. It was right after the cake nibbling part, that I noticed my cousin had developed a hand tremor.

He then set his voice in the high frequency range, and asked me, “What’s this I hear about you going to that Unitarian Church? I hear they don’t believe in the divinity of Christ.”

Unitarians are a very social and educational group. They really care about life after birth, rather than life after death. Universal brotherhood, undivided by nation, race or creed, are the basic Unitarian principles. They do not believe the Bible is a supernatural revelation although they do find in the Bible many insights and habits of its time. Most Unitarians think that scriptures of other religions are of the same value, and that knowledge is still to be written.

Virgin births have been announced about many others besides Jesus. In early Christian centuries, odd ball births were a popular thing to shout about among the Salvationist cults. We happen to believe that natural birth is sufficiently wonderful. For some, the name of God is used as a spirit to life.

A Unitarian is one who believes that in religion, as in everything, each individual should be free to seek the truth for him of herself with no “hang-ups” about creeds that say “no” to new found truths. Unitarians believe everyone has a right to choose their own religious values that fill their needs, and that they feel comfortable with.

Many of my best friends are dear devoted Christians. It gives them the moral strength they need. There were lots of great leaders that lived by Christian principles, but it’s sickening to hear those Moral Majority preachers, stating that all our founding fathers were God-fearing people because it ain’t necessarily so. When George Washington got through making us a country, he went to chuch for the last time, after he was asked to take communion. Maybe he was embarrassed, but history doesn’t say.

Thomas Jefferson questioned with boldness the existence of God, and John Adams said the world would be better off if there was no religion in it. Abraham Lincoln stated that his earlier views on the un-soundness of the Christian scheme of salvation had become clearer and stronger with advancing years, and saw no reason to ever change them.

Five Unitarians were President of the U.S., including Thomas Jefferson. Some other Unitarians of the past were Daniel Webster, Susan B. Anthony, Horace Mann, Florence Nightingale, Oliver Wendell Holmes, William Howard Taft, and poets Emerson. Longfellow, Thoreau, Walt Whitman, and author Mark Twain.

Although not Unitarians, Thomas Edison and Albert Einstein held no beliefs in God. Einstein said, “I cannot imagine a God who rewards and punishes the object of his creation, although feeble souls harbor such thoughts through fear.”

Unitarians have the feeling that over half of the nation’s population hold Unitarian principles, and don’t know it. We take up very little space in Spokane, Friends and membership roles total only around 300, but it does include the Spokane city manager and a council member, the symphony conductor, news media people, political leaders, judges, lawyers, artists, authors, many doctors, teachers, professors and students. Then a lot of us are just plain earth-type people.

Catholics, Jews and educators from Whitworth College are frequent visitors, often sharing the platform with our Unitarian ministers, speaking on human welfare and minority issues. Quakers and Unitarians get along very well together. They just happen to love everybody, even though we don’t believe in “spook-power."

In fact, the National Quakers sponsored our former minister as a delegate to the Geneva Conference in Switzerland, so he could use his influence to help stop the slaughtering that was going on at that time in Vietnam. 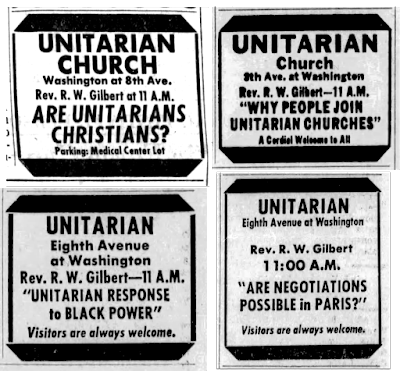