He Was a Damn Good Christian

Before I became a gleam in my father’s eyes, he darn near flubbed up my chances of ever being related to this special stock from Russia. As a young guy, while courting my mom down at Walla Walla, Pop asked Gramps for Mother’s hand and blessing. Grandpa asked Dad if he was a Christian. Pa told him he was "a damn good Christian." This paraphrasing of the type of Christian he was caused Pop to tumble from the old man’s grace. Love letters had to be rerouted to Grandpa’s neighbor, who happened to understand Cupid’s intentions much better. 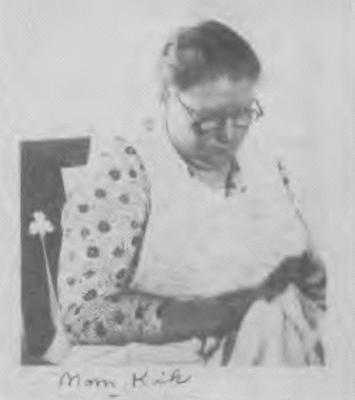 My dear mother, Margaret, was born and partly raised in Russia on a wheat farm along with other peasants. Her parents had a large amount of sons and daughters.

Lacking room, they came to America. The family first settled in North Dakota where they built a sod house because trees and lumber were scarce as hens teeth.

In a couple of years, Daddy Rieker heard the call of the open west and moved his family to Walla Walla. From there, the grown ups started to spread out to other Germans-from-Russia settlements. One brother, Christ, started farming around Ritzville—later took over some of the business buildings in Ritzville and became citified. Mom’s oldest sister, Kate was married in Russia. That couple made a beeline to Ritzville where lot of brand new land was waiting for them to farm. Brother Jake, settled in Walla Walla where he grew an orchard and built a packing house, where lots of apple packing took place in the fall.

One brother, Gotlieb, took the spiritual road and became a Congregational preacher. He got stationed in lots of towns in the Northwest. Sister Lena, found a husband that was glued to Walla Walla. They raised a lot of fruit and vegetables for anyone that cared to buy fresh stuff. Now, sister Caroline married a guy that caused her to have 12. That family helped propel the Seventh Day Adventist movement around Walla Walla and up in Canada where they also did a lot of wheat farming. Mom just stayed in Walla Walla attending church functions and picnics in the Blue Mountains—until Dad got in the picture and married her and took her to Lincoln County.