After the turn of the century, the old country roads maintenance system was unique. Each farmer kept a certain length of road in summer in shape by dumping loads of straw and manure on the dusty trails. This was before the lava beds were threatened by rock crushers.

Stumbling through those hot, dusty roads 60 years ago on our many visiting trips made our mom happy. She needed a re-charge annually. Being married to a German who learned the open ways of Yankee living took some getting used to. She especially envied her sister’s parlor, even if the doors were never open except to polite company on Sunday.

(Those old-time parlors were kind of a display room for gathered collections. Doily-like patches were smoothed on arms and backs of stuffed sofas. Near an unused sofa sat a large horn that a cousin would take out for an airing on Sundays to blow into at church. Thick curtains were locked over the windows for display. A fat family album lay at just the right angle on the highly polished empty center table. Through the dim light, and parlor aroma, an organ could be spotted. In some ways this room was closely related to a fancy funeral parlor. )

All other parts of the house were open to traffic. Lots of footsteps were extra heavy before breakfast. The sound of clattering dishes and German vocal sounds came from everywhere. The whine of the cream separator filled the air. Soon, a huge bowl of oatmeal mush was placed in the middle of the large kitchen table and a pitcher of hot milk (of all things) also arrived.

The sausage was still cooking on the raw side when the father of the house entered, and sat himself down at the head of the table, followed by his brood and their visiting guests. The morning religious services were held up until after the breakfast was in our stomachs. Then the child-bearing wife got up and brought her husband the Bible, along with his reading glasses.

A moment of dead silence took place while Uncle fastened his specs to his nose and ears. When the Bible got peeled open to the right place, he would peek over the top of his glasses to see if all hands were off the table. Scripture of a fairly powerful nature was then read. After closing the Bible, everyone had to slide off his chair and kneel down with all butts under the table, and recite a memorized prayer in unison.

Before leaving the house, working orders were given out to the matured sons. I tagged along with my cousins when they headed for the back of the barn, where they made a couple of cigarettes from a nearly empty can of tobacco. Their conversation began by using hard-boiled words with such wit and sharpness that they had me giggling. With some defiance and daring, they served their parents very well, and turned out to be hard workers and good managers. All are now retired and living off the fat of the land. 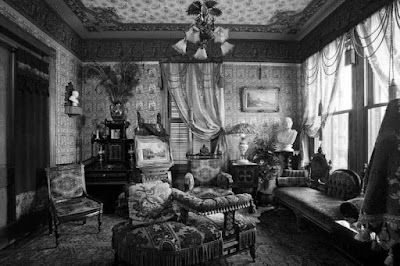