In my adolescent years I remember my Ritzville relatives as a friendly and noisy bunch. It didn’t take very long for some of them to become spiritually divided by going on a Seventh Day Adventist spree. It was due to their convictions that Sunday was not the correct day to attend church.

A whole wagon load of my relatives joined this group and took an oath to become vegetarians, thus sparing some of their farm animals a premature death. The rest of the bunch stayed like ordinary Christians and digested lots of meat.

When these animal eaters and vegetable food swallowers got together, religious friction soon surfaced. Usually a vegetarian relative would start out by saying, “God put Adam and Eve in a garden, not a slaughter house."  From the opposite side of the fence came a rebuttal, explaining a bed sheet of some kind was let down from heaven loaded with animals, and we were told by the Divine to devour all critters that had split hooves. A retort would come flying back, "Wait a minute! In the book of Daniel it states that none of the King’s helpers got wise or looked pretty ‘til all heavy foods and evil drinks were taken away  from their mouths." On and on went this kind of family squabbling.

Most of these meat devouring immigrants built a combination outside summer kitchen and butcher house. We extended our stay 24 hours longer to help the relatives celebrate “Butcher Day.” This event did not fall on any special day of the month, it just happened when pigs were ripe to kill. The early morning program started when sounds of four shots reduced the world’s pig population momentarily.— Events that followed were a no-no to anyone under 12. Was told that four bodies were given a very hot bath. Later, from a distance, it looked like they were performing autopsies on the pig’s intestines, but they were just removing objectionable materials, so later they could stuff German sausage into the pig’s digestive system.

Mid-afternoon activities in the summer kitchen grew when the four pig heads arrived along with the rest of their dismantled corpses. From then on the processing became complicated. Everything about the four piggies was divided into categories.

The next morning all the pieces and ground-up stuff had a name. We left that afternoon with the Model T holding a sizable amount of German Sausage that needed a smoke job when we got home. 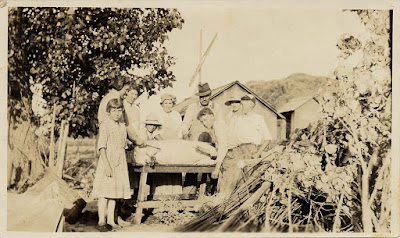 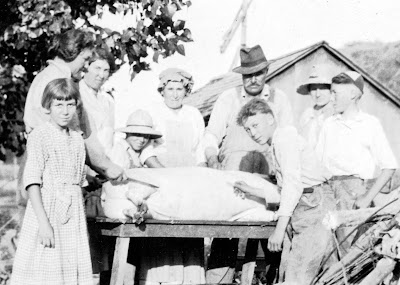