Won't Know Which Race to Cuss

One-half of me is stuffed with genes of the plain German variety that took the bee-line route to America. The other half is filled with German blood that listened to the call of Catherine the Great and got steered to Russia where they grew lots of things and made German Sausage before coming to America. These large communal tribes were called German-Russians.

With that background cruising through my veins, I was all primed to beat it down to Odessa last spring when I got a phone call to spread the word that the German-Russians were coming to Odessa, and that we should help preserve the past history of this special species. For historical records, I agreed, realizing that soon all so-called pure breds will get mixed up by crossbreeding - which can be a blessing - as we won’t know which race to cuss.

Anyway, I was glad I went, even though I fully realize now that the ancestors on my mother’s side added no special link to the chain of evolution. These Ritzville and Odessa German-Russians are just as sweet and can show their affection the same as any other ethnic group. The vibes I received that night at the “roots” headquarters were that the older foundation stock seemed to be heavily loaded with religious beliefs. 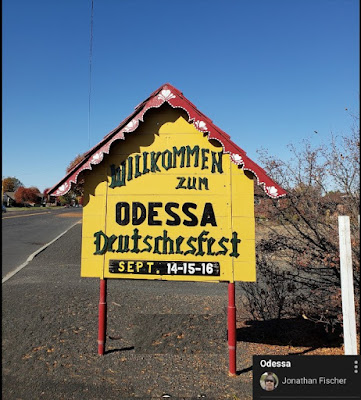