The Real Hero of this Drama

Let’s go back to a Sunday afternoon on a hot day in August 1902, and focus in on the Lou Eddy stock ranch. It was located 15 miles southwest of Davenport. About four miles from this ranch, the real hero of this drama, young George Goldfinch, came upon a man camping in a sheltered high ridge. It was Tracy, but he passed himself off as a miner. The conversation drifted from weather to crops, and to asking the lad where Tracy was. Goldfinch replied that he heard Tracy was supposed to be in the Wilbur area. Tracy then told Goldfinch he was Tracy.

With a revolver strapped to his hips, and a rifle laying across a pack horse, Tracy asked Goldfinch to lead him to the Eddy ranch. Upon arriving, Tracy made bondage of ranch owners, Lou and Gene Eddy, also Goldfinch. He forced the three to go into a small field to cut hay for his hungry horses. Tracy’s plans were to stay a little while to do some resting up.

When darkness set in, Tracy made Lou Eddy fix his revolver holster and mend his gun belt. Afterwards, he shaved, took a bath, and was Eddy’s uninvited guest for supper. Tracy’s right hand was always less than half an arm’s length from his six shooter. When beddy-time came, Tracy let Goldfinch depart with a warning he would find the two Eddys stiff, if he told anyone of his whereabouts.

When the lad arrived at the Blenz ranch where he had a job, he told his boss the hair-raising story and asked what to do. But Blenz was too stunned to get involved. So Monday morning, Goldfinch returned to the Eddy ranch on the pretense that he had left a letter there that needed mailing. Goldfinch was quizzed by the bad man who wanted to know where the sheriffs were. The lad replied he didn’t know.

Goldfinch again was allowed by Tracy to return back to his place of employment with the same threat that he would make rigor-mortis set in on the Eddy brothers if he squealed. The next morning, the lad by himself went to Creston, and sent a telegraph to Sheriff Gardner and asked the operator not to make it public. But a man by the name of Morrison who was in the office at the time, spread the classified news to the Creston citizens who got excited and made a group into a posse.

It was Tuesday late in the afternoon when the Creston posse came into view of the Eddy ranch. Tracy was relaxed enough to put himself to some constructive work by installing a track on the barn door. He looked up and asked Eddy “Who are those men with guns?” For the first time, fright set in on Tracy. He sprang behind a team of horses that Lou Eddy was leading, and told him to lead the horses into the barn, where he picked up more shooting equipment. Tracy then jumped out of the barn, and kept jumping from one rock bluff to another, as the gun battle began.

In the meantime, young Goldfinch made an appointment with Marshal O’Farrell from Davenport to meet him at Telford. From there the two left for Tracy country, to see what they could do about the situation. When they got to the Eddy ranch, to their surprise, guns had already been blazing away at Tracy. Sheriff Gardner arrived much later. He was able to get one shot out of his pistol in the direction of Tracy, thus making him also a candidate for the reward. Later that evening a shot from Tracy’s gun took him out of this world. Yet no one dared to go down to check on Tracy’s condition ’til morning, as he could have been playing possum.

When Tracy was pronounced dead, about every guy that was standing around with a gun in hand, hankered for part of the reward. It was Sheriff Gardner who hauled Tracy’s body back to Davenport. Not a publicity seeking citizen, who later claimed he brought Tracy back, and stated he had to fight off souvenir hunters when they tried to strip Tracy’s body naked.

At Davenport, the coroner appointed part of the Creston posse to escort the dead outlaw back to Salem, Oregon, and to collect the reward. This caused Sheriff Gardner to see red. He stated he himself was going to take what was left of Tracy back to Salem. Then the Creston men said some threatening words. To prevent a second battle over Tracy, the sheriff gave in.

But when the Creston men arrived at Salem, Gardner got in his punches by sending a message to Salem, telling the authorities not to pay those body escorting guys any money.

Later the reward money was settled in the courts. Because the sheriff and the marshal got there too late to do much damage, the courts awarded the reward to the Creston gang.

Young Goldfinch should have received the reward. This lad was betrayed from the start. He was the one that turned Tracy’s whereabouts in by telegraphing Sheriff Gardner from Creston, and told the operator to keep it a secret. But a guy listening in at the telegraph office turned into spy, and did a "Paul Revere" at Creston.

It seems to be true, the bad guys like Harry Tracy make the big time history. But the good guys, like this teenage Goldfinch, were just an annoyance to the reward hunters, and the publicity seekers. 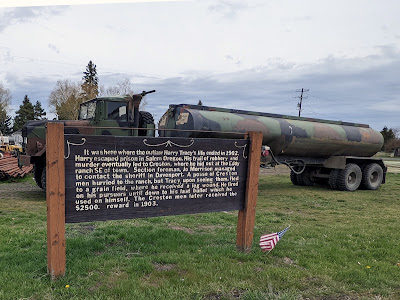 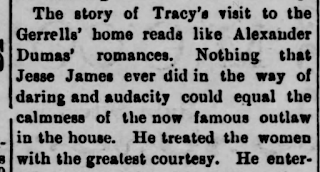 Comparisons made to Jesse James 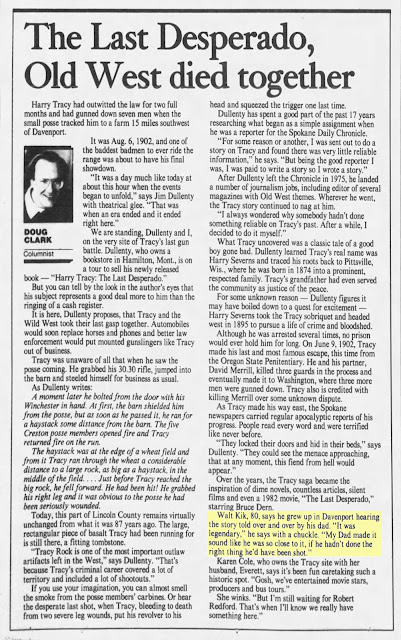