My Bare, But Tan, Chest

After that, practice writing [to the newspaper] came to a standstill 'til the summer of 1974, when a Davenport store tried to put more clothes on me than my body was used to carrying around during the hot weather.

For 47 years I’ve shopped at Safeway in Davenport. I was allowed to shop in the mode of dress I chose for summer time wear for all these years. Now for the first time, and in direct violation of my civil rights as a citizen. I’m not allowed to dress as I please, in a place that serves the public for the essentials of life. I’ve known all the managers Safeway had, and the present manager is tops for my money—friendly and always kidding. I go away feeling a little more gooder, deep inside.

But the discriminating block-head boss that’s over him probably has a personal hang-up against anyone who wears a summer tan. Now if the manager doesn’t throw me out, or refuse me service, then he will be defying his sir-boss.

Dear Ms. Editor, this is my tale of woe, and I know I’ll feel better if I get it off my bare, but tan chest. I lived most of my life in this conservative community that usually believes in keeping the status-quo. I’ve been known by the majority of the people of Lincoln County in past years as “Skinny Tarzan,” “Willy Wiley,” “Nature Boy,” etc. and many farmers figure spring hasn’t arrived until my shirt comes off, so I do serve some useful purpose.

Years ago when there was no scandal in the White House, and for nothing better to do, someone started a rumor that I was arrested in Spokane for wearing just shorts and shoes while shopping. Before it became a common sight, people did stare at me, but that was because I have knobby knees.

I’m kind of a health nut and a half-ass vegetarian. I was a sickly kid, and wasn't expected to live very long, then in the mid-twenties Bernarr McFadden and my Seventh Day Adventist relatives brought life back into me, and I kinda learned to like it.

I’m sure my way of life has not polluted the dozen or so groups of young people that Sugar and I have worked with throughout the years. I keep myself extra clean, that's part of my religion. When I go to town Sugar hands me a clean pair of shorts that she pit-pats into shape for me.

Why anyone wants to go barefoot in this pollution-laden country, with broken bottles, and most of the city covered with hot tar in the summer, is beyond me. Our caveman ancestors, yes —there was nothing but green grass and wild flowers for them to frolic in (maybe occasionally stepping into dinosaur dung). Even if there were supermarkets in those days, the action of the feet was and still is self cleansing.

Dear Editor, this is what bugs me. A dirty looking guy, and I do mean dirty, was in line paying for groceries —his shirt, what was left of it, was filthy. Shoes, around the heels and sides filled with everything he could find to step in. He can shop at Safeway— I can't. In the checking lane ahead was a he, or she. (I couldn't tell, as both sexes of the younger generation can and do grow lovely long hair). The back was bare—no shirt. I walked around and found out it was a she who was well endowed. She had a unique way of fixing up a couple of hankies just right. She can shop there too - I can’t. 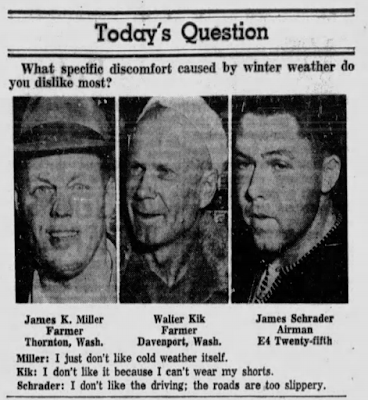