Mister, Are You Going to Kill That Kitty?

Due to a mental block, the only thing I had going in Grade School was history and geography. A phobia developed in the field of English and spelling. It’s now a chore to figure out what letters of the alphabet belong where, when it comes to those big words.

Then why did I think I could write good enough to make the print? I didn’t, but an unwanted stray cat started it all. I had to pay for my first seven words to make the paper. Luckily, from then on, all articles made the print without charge.

December 1966, an ad was placed in the Davenport Times:

The following week, the paper accepted my explanation:

I shan't repeat the dire threat I placed on a lost and defenseless cat that came to our house for help last week. It had it’s repercussions. As bad as I feel about it all, I’m glad I live in a community where humans are such good people. They drove home this fact: that harboring the intentions is as bad as committing the act.

Phone calls came in from a little girl and a man that I had pegged on the rough side of life. A boy came out of Safeway store and asked, “Mister, are you going to kill that kitty?’’ Then the law took over to haunt me. Steve Robertson of the State Patrol drove in and asked if the Siamese cat had found a home.

Sugar stood by me through all this (bless her). Now l want to tell you about the happy ending. Late Thursday night, on our way home from the Civic Theatre, where we saw the play, Mr. Scrooge, we found a couple from Coulee Dam waiting in our yard. They have four youngsters at home, and another mama cat, but at this Christmas time, they still have room for this homeless and lost cat.

After that, practice writing came to a standstill 'til the summer of 1974, when a Davenport store tried to put more clothes on me than my body was used to carrying around during the hot weather. 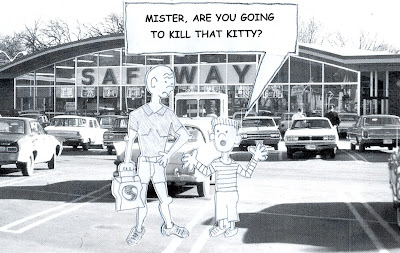