Cowboys usually got their evenings off. This gave Speedball time to listen in on an after supper bachelor’s bull session. Naturally, women entered the conversation. Speedy’s ears picked up the information that over the ridge lives a homesteader that had a grown teen-aged daughter who’s mother had gone to the great beyond. It made this girl, Anna, half an orphan. Her daily chore was caring for her younger brothers.

Starved for the sight of a pretty girl, Speedball asked Dad if he wouldn’t mind going with him to Anna’s place and introduce him. Then, to stick around a while and help him josh with this young lady.

Rain, the next evening, didn’t dampen Speedball’s enthusiasm for wanting to meet Anna. The two rode over and tied up their transportation by the watering trough, then Speedball parked his ever present fiddle on the woodpile in case it was needed for entertainment.

A tongue tied cowboy made getting acquainted with Dad’s neighbor quite a chore. Dad said Speedball had the habit of just grinning a lot when the opposite sex was around. This time was no exception when Anna made her presence in the front room that night. To show his protege off, Dad suggested that Speedball go out and get his fiddle, and play some music.

Speedball sprang up before Dad finished his suggestion, and headed for the woodpile. But the rare wood in Speedball’s fiddle was too rain drenched for the music to come out right. The ‘Irish Washer Woman’ sounded worse than it was supposed to.

On the way back to dad’s place, Speedball didn’t comment about Anna ’til they parked their horses in the barn. Then he said, “Anna is pretty, isn’t she?”

Dreams of the Lake Creek Anna faded from Speedball’s mind suddenly when Johnnie Engle, a big shot farmer from the Harrington district, arrived on the scene. Engle took what was left of Thorp’s highly promoted riding horses. Speedball went with the deal.

Speedball could write better than he could talk. Dad received a total of two letters from him at his new location. He was lonesome for the Lakes, and the scenic coulees of the Lake Creek country. It was a place where a simple cowby didn’t have to give an account for each day of work. If one of Thorp’s horses couldn’t have been found, there was always another day for riding in search of that wandering horse.

He just hated riding a plow all day and looking at the rear ends of a string of mules. There were two other guys doing the same thing in that same field. On the bright side, the daily dollar he earned did give him the feeling that some day he would be independent. He was all debt free, and was the legal owner of an aging horse, a well worn saddle, and a fiddle he lost interest in.

Speedball also stated he wasn’t as bashful as he used to be, and his social life had brightened up some too. He had just been to the Fourth of July dance at Bluestem, and he got to dance twice with a pretty girl. 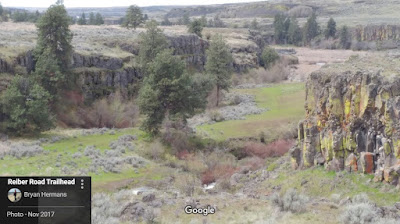 "...the scenic coulees of the Lake Creek country."