Our Search for Sugar's Dad

After all these years of living a fulfilled and busy life, why does anyone want to dig into the deep and unknown past. I suppose it’s just plain curiosity.

In our search for Sugar’s dad, we had to head into unknown territory. Sugar already knew that in 1920 down at Big Piney, Wyoming, a personal event did take place between Sugar’s mother and a guy that saw many moons. The result was that Sugar got born—For the last 50 years Sugar often wondered, what was her birth father like. Was he a worthless stiff or a guy with normal brains that picked up the habit of developing outside interests as a hobby. Sugar’s mother Emily (the poor dear) refused to reveal anything except birth certificate and what was necessary for Sugar to get her Social Security straightened out.

So on our 50th year of living together in marriage bliss, it was time to dig into available records, so she could find out all the good and bad genes that’s floating around in her system. Sugar’s instinctive search for her origin in no way detracts from her appreciation for the dad who raised her as his own.

When we arrived at Pinedale and Big Piney, we hit the ‘jack pot’. Every person we were told to interview was very friendly and helpful in Sugar’s search for her roots. Most interesting and informative interview she had was with cattle baron, Jim Mickelson Sr., who with his sister, Mildred Miller have 47,000 head of cattle scattered around that vast and boundless territory.

Mr. Mickelson and his dad knew Sugar’s father, William Henry [Hayden?] McDonald real well, and had a lot to tell us. He stated that ‘Henry’ became a self educated man and learned to play classical music on his violin. (In cowboy country?) Mr. McDonald laid out Mickelson’s irrigation canals and the town of Big Piney.

Jim Mickelson is a stately gentleman that wears the rugged Wyoming look quite well. The Mickelson’s whole family, including their foreman and the Budd brothers were featured in a Robert Redford documentary movie that was made on Big Piney recently.

When Sugar visited the Big Piney library, she was handed a book titled, “They Made Wyoming Their Own”, published in 1971, by R. Wallace, A Wyoming historian. To Sugar’s surprise, there were two pictures of her father in that book, and a chapter entitled, ‘Gunplay’, featuring her father. The librarian copied that chapter and pictures for her.—Since that event in Wyoming history has the flare of the old west, it’s worth copying.

On page 95, Gunplay reads as follows: “Wyoming drew land-hungry men. In 1885, a man by the name of Spaulding filed a claim in the Dry Piney and built a log cabin and corrals...He aimed to build a horse ranch but for some reason, he changed his mind, sold the improvements, and released the claim to Henry McDonald in the fall of 1888. McDonald and his partner, Lon Linscom were living there during that terrible winter of 1889-1890.

“In the fall of ’89, a party of emigrants drove past the Horse Ranch and over the hill onto Birch Creek, where they made camp. Winter was coming on them in all its bitterness. Their horses were poor and began to die. Their supplies were low, and they had women and children to care for. Mr Woolsey, a man with family, seemed to be heading the group. In his extremity, Woolsey, turned to McDonald for help. The two ranchers shared their supplies and divided their log cabin with the stranded group, those men folks agreed to help supply wild game for everyone during the winter. Among the emigrant men were Jim Burton...

“Somehow they survived the hardships of that difficult winter, and spring showed signs of arriving. McDonald was out at work on the place one day, and Lon Linscom, who was not a robust man, was resting on a bed. Woolsey and his companions were conversing in an adjoining room, their voices clearly audible. Lon suddenly came to attention and began to listen carefully, for they were making plans to run him and McDonald out, and to take over the Horse Farm as their own. Evidently they did not know that Lon was there.

“When McDonald returned later in the day, Lon told him of the plot. McDonald went at once to Woolsey and told him that, with the green grass beginning to show, it was time for him and his party to move on. Woolsey objected, but he and his men finally left the house and went to make arrangements for other living quarters. Feeling that they had been unjustly treated in being turned out, they abandoned the effort to house themselves and, instead, barricaded themselves behind some rocks from which they began firing at the house. McDonald and Linscom had only one rifle between them, so McDonald stepped out and returned a few shots, which seemed to quiet things down for a few hours. He got on his horse and rode down the valley to the Calhouns to borrow another rifle. When he returned, he and Linscom stayed in the house that evening armed.

"After dark, the dogs set up a racket, barking in concern over something down at the bam. McDonald went into the room where the emigrant women and children were, and nailed boards over the windows. There was no way to enter or leave the house, then, except through the room where he and Lon were stationed. He and Lon took turns keeping watch through the dark part of the night. In the moonlight, they could see men moving around the bam. Lon was sleeping when McDonald awakened him. Day was breaking, and two of the men at the corral were plainly visible. One was lying on the ground with his rifle sighted through the corral fence. Another was standing near him with a gun resting on the fence rail. Both were aiming at the house.

"McDonald had cut a small hole in the house between the logs, where his borrowed gun was resting. Lon’s gun rested on the window sill, the window being slightly raised. Tension was becoming all but unbearable, when suddenly Lon heard McDonald’s gun crack. The man on the ground at the bam dropped his gun and never moved again. The man beside him ran out of sight around the bam. McDonald waited a few minutes and then sent one of the emigrant girls out to identify the man who had been shot. She came back with word that it was Jim Burton. The other emigrant man had ridden away, keeping the bam between him and the house.

"After notifying the neighbors of what had happened, McDonald and Lon packed a few supplies and began the trip to the Old Ham’s Fork Station, where they gave themselves up to a deputy sheriff named Culberson, who placed them under arrest and took them to Evanston. The Woolsey party caught up with them at the Ham’s Fork Station and threatened them repeatedly, but the deputy sheriff kept things in hand.

“Lon was released at Evanston for he had not fired any shots. He went back to the Horse Ranch. Jim Burton had been buried down the valley along the fence on the south side of the Home Ranch field...

“McDonald, however, was held in Evanston until court set again, he was released on a verdict of self defense, and he too returned to the Horse Ranch. The next year, Mr. Woolsey came back, threatening to run him off the place, but McDonald replied that, if Woolsey wanted to have another try at that again, to start shooting. Woolsey did not take him up on the invitation and left, and never molested him again.

“At the time McDonald first came to this section, the territory was still full of hostile Indians and Mr. McDonald was able to relate many interesting tales in connection with their activities...

"William ‘Henry’ McDonald was a man of unassuming nature and reticent of speech hence many interesting episodes of his early life in this part of Wyoming that would have made interesting and valuable material for either the historian or fiction writer remained untold...He was truly the pioneer surveyor of this part of Wyoming and more than half the present irrigation ditches and other projects requiring a survey were surveyed by him. It was he who surveyed out the townsite of Big Piney...In addition to being surveyor, he was Land Commissioner for many years and handled practically all of the land matters arising in those early days...He died January 17, 1933, and was buried in Big Piney’s Plain View Cemetery.’’ 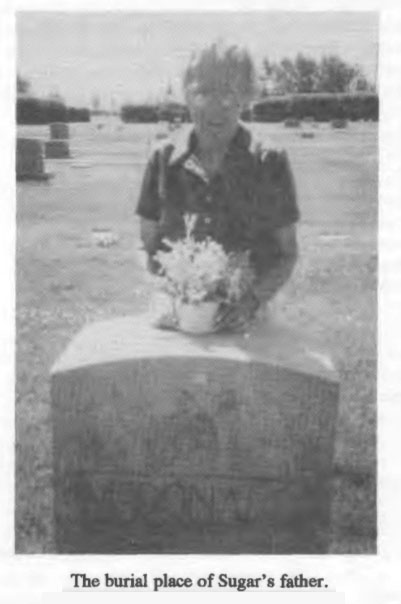 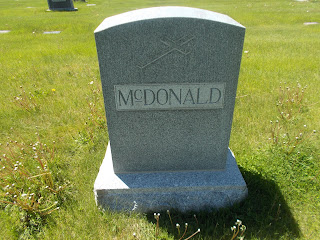 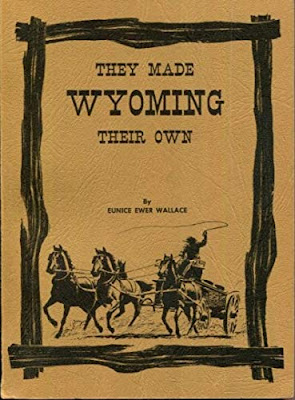 My Search for the Missing Kik Baby
Excerpt from "A Pioneer Story" Kik-Backs, page 5: (link)
An article in the Walla Walla Journal, dated Dec. 15, 1879, read as follows; “Sometime ago we gave the painful news of a poor mother dying at Wallula, leaving a husband with five small children. Since then the father found homes for two of the small ones. Dr. Clowe of Walla Walla took one of them. Mrs. Thomas Collins took the baby. Mr. Kik, an immigrant, lost all in coming here, even the mother of his little ones.”
The spirit of Christmas didn’t even try to raise its head at the Minkles’ cabin that December day.
When the spring thaws had set in, Dr. Clowe told Grandpa there was lots of good land north of Sprague that the government would just love to give away. The Minkles offered to take care of the third youngest child, while Grandpop loaded the two remaining kids into his prairie schooner, along with his earthly possessions.
Arriving at Sassin, he found Mr. and Mrs. Delius Woods, who had already staked out a claim. At the mercy of the Woods, he dumped off my dad and his sister, and went looking for land. The claim on which he filed was well chosen. The gentle hills were just made for farming.
This 160 acres of land was called a preemption. It cost Grandpa $250, but he had 10 years to pay for it. A timber claim was taken for another 160 acres. It was free, but the government made him plant 10 acres to trees.
After squaring up with Uncle Sam, he got his axe out and chopped down some stray pine trees after which he made himself a one-room, one-door, one-window log house. Then dug a hole deep enough to make a well. Then Grandpa put on his coat and got ready to pick up his five scattered children. Kitty and Sally then had the job of toting Gramps and his wagon back to Walla Walla.
Dr. Clowe wanted to adopt the son he kept, and it sounded like a sad parting of the ways when the youngster was tossed into the wagon. No trace could be found of the baby girl, nor [of] the Collins family. Rumors were that they moved to Yakima. So, when Grandpa got to Wallula, he fixed Kitty into a saddle horse and road to Yakima. Neither [the] Collins nor the baby could be found.
So what happened to "baby Kik" and the Collins'?
The only relevant "Thomas Collins" from Walla Walla I found in the Washington State archives was this 1882 entry with no image of the document: 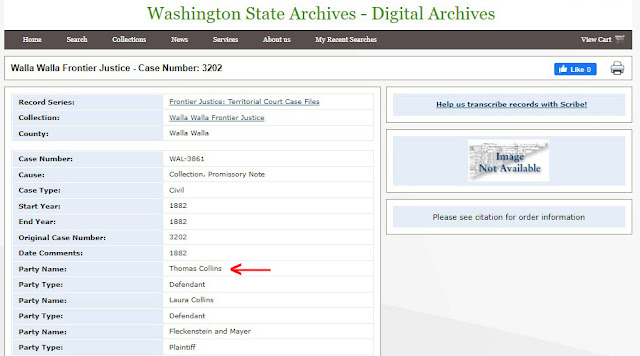 But it adds the name of Laura Collins, probably as wife.
A search for Laura Collins turned up this census from 1885, Spokane County: 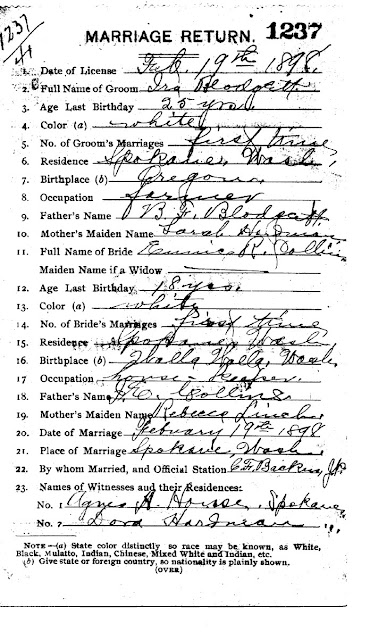 Two years later they were in Linn County, Oregon, where Ira Blodgett was born. One daughter, Neva. 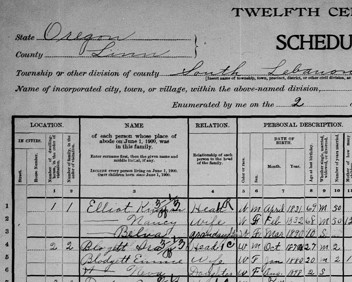 The 1910 census finds them back in Spokane County with 2 daughters, Neva and Viva: