Gramps Started to Get Bugged

Art Norlen, a big old-time Swede, lived a rough and tumble life in the mines and logging country of Idaho. He decided to settle down by marrying our widowed friend, Ruth Hussa. He wrote a very interesting autobiography entitled “The Vanishing Immigrant.”
Like Art, my scope of recall lies too much around my own environment. I just know there were a lot more interesting things that had happened in Lincoln County than I know. Local history excites me.
All this got me to thinking about how an immigrant with his five motherless children spent the first Christmas in Washington Territory.
First, let’s go back for this century-old story to Germany in the spring of 1872 when a guy by the name of David Kik, Sr. ran off with the baker’s daughter and beat it to America. Grandpa did not want to serve in the German Army, as he had no desire to learn how to kill people. He and his brand new wife got on a sailboat so they could be blown over to New York.

Yankton, South Dakota, was the first test for these newlyweds as they staked out a homestead. After five years and a few babies were born, Gramps started to get bugged when he saw what the grasshoppers were doing to his crops. He found a guy that didn’t mind grasshoppers and sold him their farm.

He then decided to take his family to Los Angeles to see what 10,000 Mexicans and about 500 white settlers looked like. Hot weather and cactus wasn’t their bowl of cherries.

So Kik piled his family on a schooner that was headed for the Columbia River. Gramps then bought a team of Arabian horses named Kitty and Sally, and hooked them to an overloaded wagon and then headed north. His only protection and food-getter was a double-barreled, muzzle-loader shotgun. Why it took grandpa six months to get up here to Fort Wallula, I never did know.

When he pulled up to Wallula, he found his brood sitting and waiting for him. Gramps also found his wife very heavy with child. This one was going to be number five. They all found a haven for the coming winter with the George Minkles. Grandpa no sooner got his legs stretched out from his long wagon trip when grandma gave birth to a baby girl. The cold winter wind whistling through the Minkles’ single-boarded shack didn’t help any. She died from child birth and was buried at Wallula’s Army Cemetery.

An article in the Walla Walla Journal, dated Dec. 15, 1879, read as follows; “Sometime ago we gave the painful news of a poor mother dying at Wallula, leaving a husband with five small children. Since then the father found homes for two of the small ones. Dr. Clowe of Walla Walla took one of them. Mrs. Thomas Collins took the baby. Mr. Kik, an immigrant, lost all in coming here, even the mother of his little ones.”

The spirit of Christmas didn’t even try to raise its head at the Minkles’ cabin that December day.

When the spring thaws had set in, Dr. Clowe told grandpa there was lots of good land north of Sprague that the government would just love to give away. The Minkles offered to take care of the third youngest child, while grandpop loaded the two remaining kids into his prairie schooner, along with his earthly possessions.

Arriving at Sassin, he found Mr. and Mrs. Delius Woods, who had already staked out a claim. At the mercy of the Woods, he dumped off my dad and his sister, and went looking for land. The claim on which he filed was well chosen. The gentle hills were just made for farming.

This 160 acres of land was called a preemption. It cost grandpa $250, but he had 10 years to pay for it. A timber claim was taken for another 160 acres. It was free, but the government made him plant 10 acres to trees.

After squaring up with Uncle Sam, he got his axe out and chopped down some stray pine trees after which he made himself a one-room, one-door, one-window log house. Then dug a hole deep enough to make a well. Then grandpa put on his coat and got ready to pick up his five scattered children. Kitty and Sally then had the job of toting gramps and his wagon back to Walla Walla.

Dr. Clowe wanted to adopt the son he kept, and it sounded like a sad parting of the ways when the youngster was tossed into the wagon. No trace could be found of the baby girl, nor [of] the Collins family. Rumors were that they moved to Yakima. So, when grandpa got to Wallula, he fixed Kitty into a saddle horse and road to Yakima. Neither [the] Collins nor the baby could be found.

Kitty and Sally finally lugged Kik and his two remaining kids back to Sassin, where at the Woods’, grandpa picked up kids number three and four. All he could offer the little ones was a log cabin with a window from which they could look out. That’s just what they did that fall, when he locked them in the cabin while he took four sacks of wheat to Gunning’s Mill at Minnie Falls, where a small water-wheel ground it into flour. 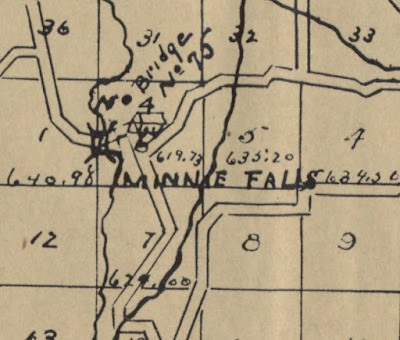 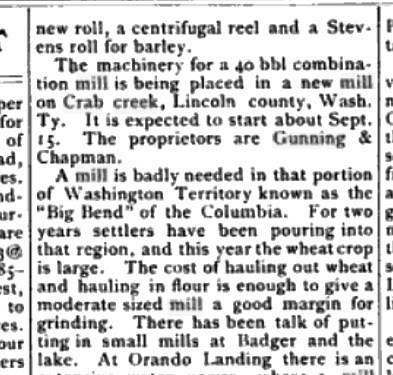 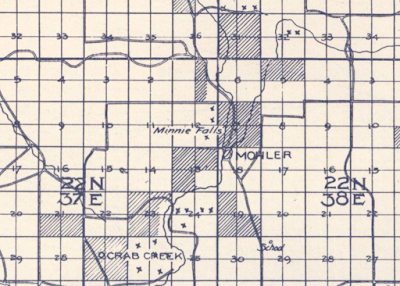 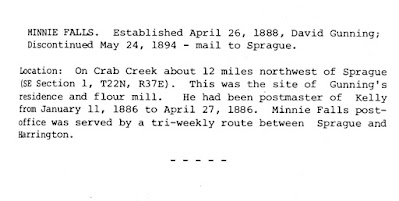