When Emily in 1920 found herself pregnant with Sugar, things didn’t set very well with her family. In her teens, she did not have the ability to fight for her rights. So, with the threat of being thrown into a convent, Emily left home. After leaving Big Piney, the sheriff picked her up on the road to somewhere. On the road back, Emily told the sheriff she had to go to the toilet. Instead she sneaked out a back door and disappeared. From there on all information ceased.— Emily somehow managed to get to Spokane, and showed up at the Salvation Army, where she had Sugar.

Alone and caring for a baby was quite a chore in those days, since there was no state or county support for the unwed. In her wandering with little Sugar, she was able to find employment around Hartline, where she worked on a farm. When the work season ended, Emily found work elsewhere. Finally, she found employment out here at Rocklyn, where the Ed Krugers hired Emily and didn’t mind taking in Sugar as excess baggage.

Ed Deppner was working around the Kruger district at that time. Since eligible women look good to all men—Ed was no exception. He asked Lena, the housewife, if he could take Emily and her kid to the church of his choice in Harrington. Since Mr. Deppner was recommended as a well behaved guy with a motive, Emily took his offer.

After church, Ed saw to it that ice cream was in store for Emily and Sugar by taking the two vagabonds to the drug store fountain. While scooping up ice cream with his spoon, he got to thinking it would be pretty hard to live without Emily, but he had a problem. He had already sent money over the sea to Poland so his planned future wife could come to Rocklyn. He had known her as a kid before coming to the U.S.

Mr. Deppner also had competition. Jake Fichtenberg began courting Emily by trying to take her and Sugar to Spokane. Half way up, Jake’s car got tangled up in a lot of loose gravel, causing his car to land on it’s side. No one was hurt.

When Jake’s mishap got spread around, it made Mr. Deppner think that God was working in his favor, by seeing that Jakes’ cargo never made it to Spokane. This divine revelation caused Ed to move in quickly. He showed Emily his humble little cottage out in the middle of his pasture and all his other earthly possessions.—He then asked this young lady with a past to marry him. Even though that romance lacked a lot of fire, Emily accepted his offer. Ed’s stepmother frowned on the idea that he dumped the lady he sent for. However, Ed's free ticket did get this eligible lady to Rocklyn where she soon married a man of her own picking. 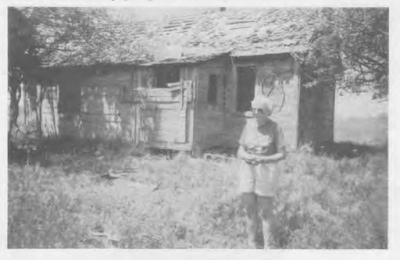 Remains of the crowded house Sugar grew up in