Lots of Sweat, But No Tears

Now let’s go back three more years to 1916 when the railroad was put to use one Sunday evening without any trains being involved.

Bishop Zaebel, every once in awhile, would check the Evangelical Churches in the Harrington, Rocklyn and Reardan circuit to see if everyone was still following the straight and narrow path. He was a fat, jolly guy. To us kids, when he led the services, the hands on the clock seemed to move quite a bit faster.

After giving his blessings at Rocklyn, the Bishop had another schedule that evening to check over preacher Streyfeller's flock at Reardan. Old man Boyk had a Haines car available for delivering the bishop, but, there was one problem. During this particular time the supply of gasoline had dried up all over the Inland Empire. Kerosene was available, but it made the car run funny, so it was a no-no.

The arrival of the late Sunday afternoon train from Spokane always drew a crowd. Local folks would start arriving about one-half hour before train time for a chance to visit and watch the train come in. When we saw the conductor get off and place a stepping block, we knew a citizen or two would be getting off. The baggage door would open up, and out would come the Sunday papers, with all the Sunday mail. (Yes, mail on Sundays.) The storekeeper’s daughter was the post-woman, and she handed the mail to all that were there.

A repeated scene of this kind was happening that Sunday evening, except for those few who had a car but no gas. Nothing was happening to get the bishop closer to Reardan. He looked rather pathetic standing beside his suitcase in his well-stuffed suit.

By this time, there were enough young men who gathered around the store to cook up an idea on how to transport the stranded bishop. The section boss’s handcar came to their minds. It was a rig about 10-feet long with small boxcar-like wheels on the bottom of each corner, a gear-like things with a rod leading up to a teeter-totter that had four handles on it.

Two guys would teeter, while the other two guys would totter. Four young guys volunteered to power the bishop out of Rocklyn. They placed the bishop on the back end of the handcar, so just in case he tumbled off, he would not get squashed. Then the four started pumping the rig down the tracks for about 20 miles, fearing no bull, because this was three years before the "train bull" dispute.

With lots of sweat, but no tears, they delivered the man of cloth into Reardan just in time for the opening song. 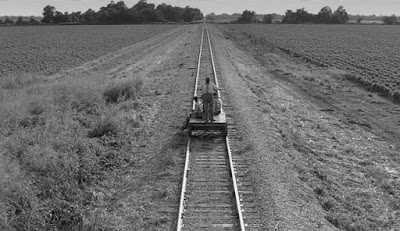 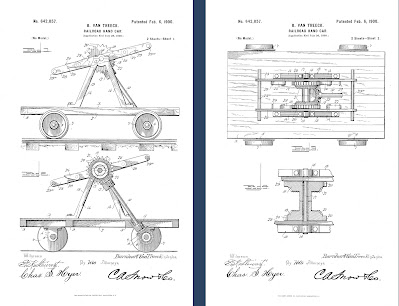 "...a gear-like things with a rod leading up to a teeter-totter that had four handles on it." 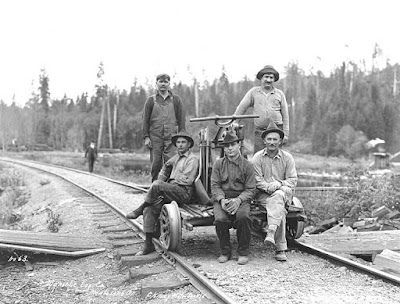 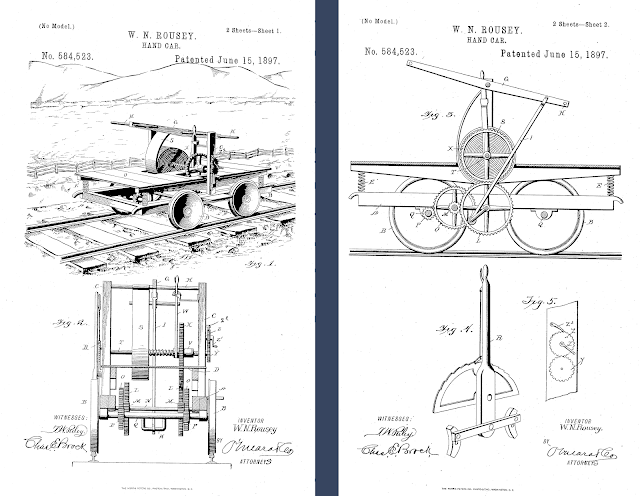 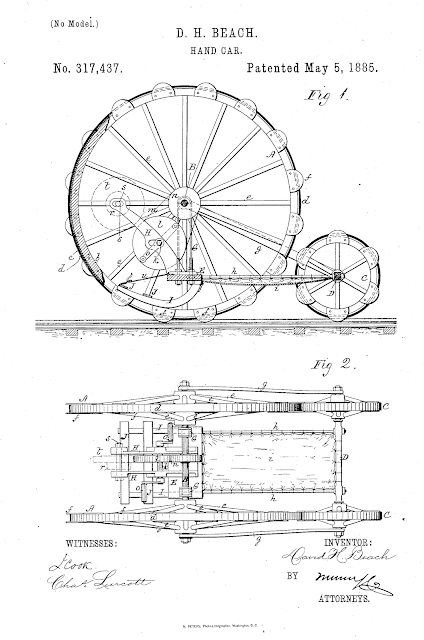 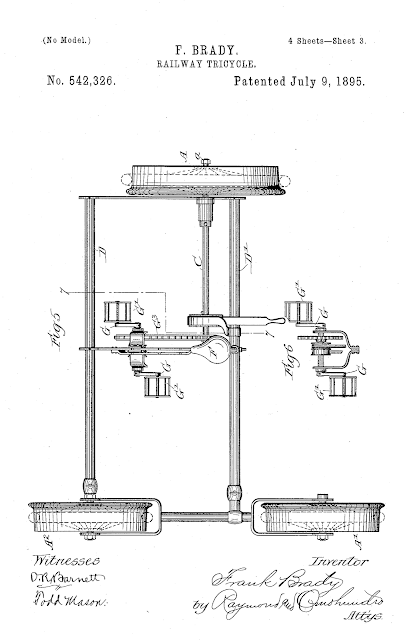 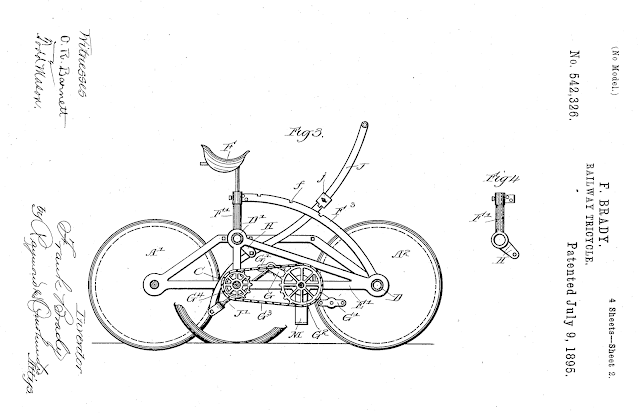 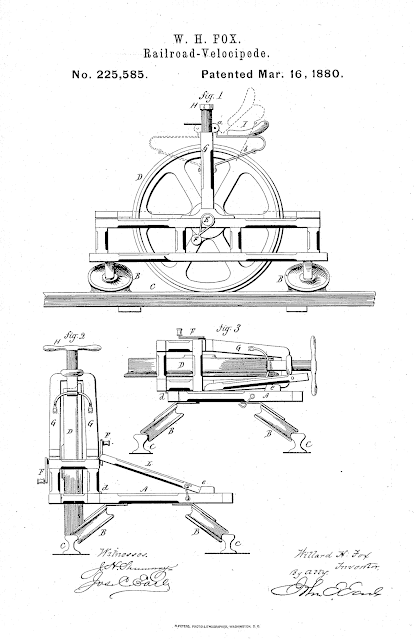 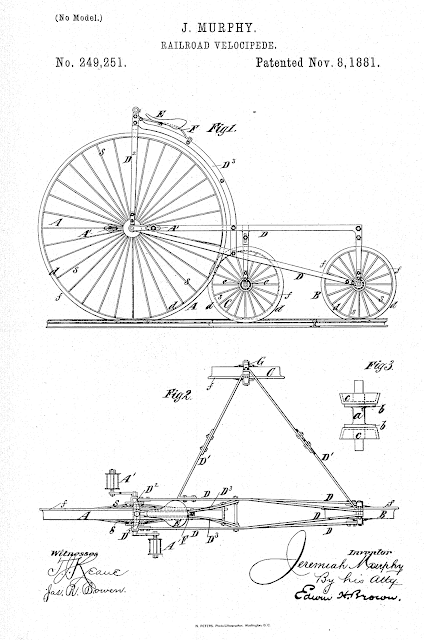 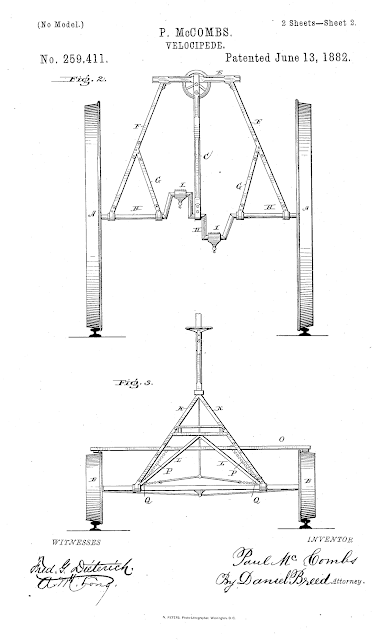 "My invention consists of certain new and useful improvements in bicycles, the same being a double bicycle or quadracycle adapted to running on railroads." 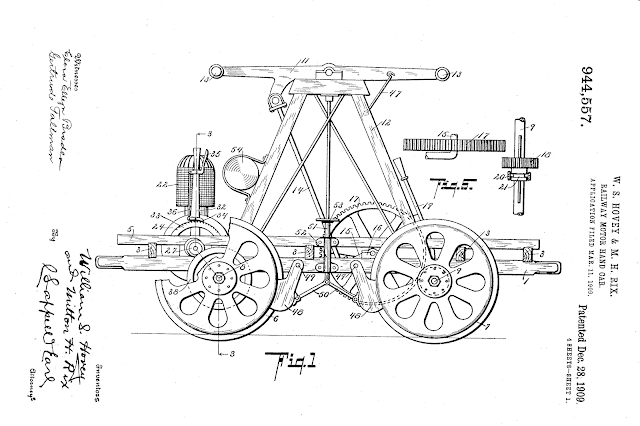