An October Sunday, a couple of weeks ago, was a beautiful day. A good day to recharge that summer tan, so [we] decided to revisit Ruff after a three year abstainance. Maybe the big crops since then could make the town of Ruff shape up.

We were greeted by the sight of four large piles of spilled wheat that partially hid the elevators and the business district of Ruff. After crossing the railroad tracks one look told us it was a ghostier town than before. A sign still stood pointing to where the grocery store is at, an aid for the wandering tourist.

Finding a parking place was no sweat. A sign on the door said “Closed on Sundays.” If service is needed, contact the big white house. After trying to spot anything looking white, a large lady came driving up from a yard full of kids and geese in a '59 gas-guzzling car. She was good enough to open up her store, so we felt obligated to buy something. Soon found out her frozen bars had more frost on the outside than ice cream on the inside.

We found out the town’s population had dropped from 27 to 22. The store owner produced most of Ruff’s population. She has ten kids, counting the baby she just had in September. Her married son lives there too, and is about to produce number 23.

The old hotel now stands empty, and the livery stable is still popular with camera fans. The city’s “Clean Rubbish Commission” is inactive, probably due to lack of funds, as we noticed some extra discarded stoves and refrigerators had been added to their outdoor inventory.

Someone hungry for wood demolished the church, and the town sign of Ruff, that the former tenants put up, has been swiped by souvenir hunters. Since there is no hope of a coal-fired plant getting established there, the town is doomed. 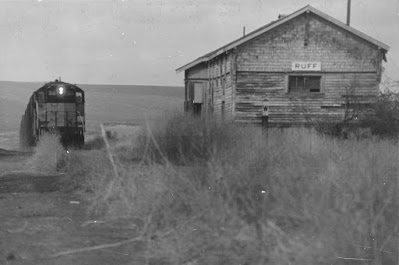 Photograph by J. Foust; courtesy of the Othello
Community Museum and BigBendRailroadHistory.com 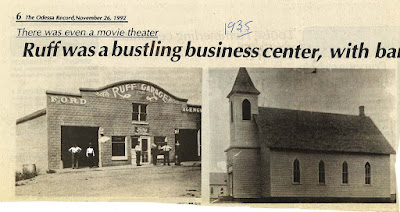