Treated to the Best of Hay

There were also lots of old timers that made their living by serving prosperous farmers in small but unique ways—many were living in small houses, minus the picket fences.
The increased need for more horse population on the wheat farms in those early days depended on the mares and a visit from a stud horse. But farmers hardly ever owned a stud horse, as they made very poor pulling partners if hooked up next to a mare, because studs simply would not behave themselves.
Three early day guys around the Davenport area were satisfied by just making a living off of their reputable stud service. All three stud jockies came in various sizes. Bill Shelton, who was hired, was on the heavy side. Charley Smith was the little guy—the right size for riding his stud from farm to farm without tiring the busy stud out. Cliff Poison was the tall rugged, raw boned type—Cliff was weather beaten and past his prime. For transportation he had a two wheel cart that he tied behind his stud. Cliff usually stayed overnight with some farmer and got a couple of free meals, while his stud was treated to the best of hay and lots of charged up oats.
Long before the horse population reached its peak, a Sicillian peddler from the Mediterranean area migrated to the Sprague, Ritzville and Odessa country. A box hung on both sides of the horse, and it held lots of reading glasses that saw print in various sizes—also gaudy jewelry, watches and of course mouth organs of different shapes and even Jews Harps. His supplies lasted him ‘til he completed his circle among the Irish, Portugese and lots of Germans, then he and his horse would mosey back to Spokane for another fill up.
This Sicillian peddler’s habits were about the same as an old covered wagon peddler that covered this territory around Davenport and the Spokane River. Both would stay overnight at some farmers place—but this sub-compact peddler would only leave a mouth organ, or some junk jewelry as payment for his overnight stay.
"Odd Characters" Kik-Backs No. 3, page 25, part 2 (continued)     (previous)     (home) 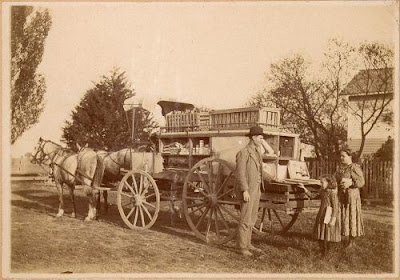