An Odd Character Myself

Around the turn of the century, a guy by the name of Schnaze was a sheep herder in the Edwall district. When he got past middle age, he turned himself into a peddler of trinkets, and appointed himself as a part time preacher. Schnaze’s ambition was to work his way up to becoming a man with a message.
During the summer of 1911, Schnaze hit the Rocklyn Evangelical church on a week end by driving his horse drawn rig into a church member’s yard. When folks arrived at church the next morning, there was the real preacher, and then there was Schnaze. The hired minister felt he should junk his prepared sermon, to introduce Schnaze as the roving evangelist of the hour. Schnaze lasted more than an hour, by feeding the congregation a sizable chunk out of the Bible.
Schnaze, the uninvited, thinking he was ‘hot stuff, sent the church a bill for his summertime sermon. Mike Maurer was authorized to mail the wandering evangelist a bill for the hay his horse ate up, and for board and room. It happened to come to the same amount that Schanze’s preaching bill came to. Preacher Schnaze finding no profit in his fling through Rocklyn, never returned.
In some ways I was considered an odd character myself. In my younger years, I really never conformed to the standard that was set up by the human race. Self imposed health stuff and running around in what I felt like wearing was sort of frowned upon. Now with the younger generation taking over, they are accepting the taste of individualists. The novelty of being different is slipping away.—
"Odd Characters" Kik-Backs No. 3, page 25, part 3 (previous) 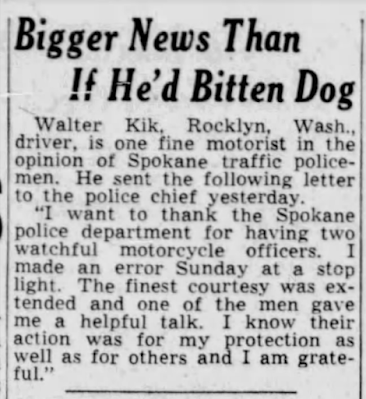