Didn't Have the Right Kind of Stuff

While visiting with Crayton Guhlke, we got to talking about the dozen or so odd characters that were around during the early days. These guys varied greatly in their habits as they worked their way through life. They weren’t accepted by the elite, as they didn’t have the right kind of stuff to fit into society.
During the depression years, Claude Silver was a wandering character that spent his last years around Davenport. He made his living by investing in a long sharp knife. When a cow or steer died from some serious illness, Claude was called from the pool hall to skin the animal, before the rendering truck helped themselves to the rest of the remains. Skinner Claude’s hard earned money from the sale of hides was usually spent by bicycling to Spokane to visit the ‘ladies of the evening.’
Another odd character was a tall lanky guy by the name of Ole Johnson. Ole sort of came with a new saloon that opened up in Davenport before the turn of the century. About all he ever earned while working there at the saloon was all the snuff he could put on his gums, plus beer and lots of baloney sandwiches. A cot next to the back stove was his bedroom.
Ole was always broke, but he did claim that the broom with the polished handle that he used to sweep out the saloon was his very own. He was rather a comical guy, so said dad. For years. Ole was known as the best saloon flunky in Davenport, but his reputation as a flunky wasn’t good enough reference for getting promoted to a better job.
Fort Spokane, north of Davenport, was taking new recruits that year, so Ole began dreaming of a better life. As far as is known, Ole was the only one to join up at the Fort from this area.
His dreams of a fresh start in life soon ended with his first winter there at the Fort. With nothing to do except drill work and other army regulations, Ole asked permission to go horseback riding that took him miles from the fort. The horse stumbled on a snow covered ledge and dumped Ole, breaking one of his legs.
When the horse finally wandered back to the Fort some soldiers followed the horse tracks back and found Ole. Both feet were frozen instead of his body. But old Johnson’s body couldn’t stand the shock of frozen feet, and he died.
"Odd Characters" Kik-Backs No. 3, page 25, part 1 (continued)     (home) 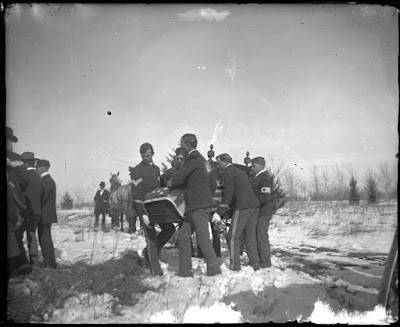