Used Their Brains for Other Vocations

It’s interesting what all can happen in a couple of weeks to help bring back more memories of by-gone days. Ritzville’s fair theme in 1988, “Proud of Our Heritage’’, was in celebration of Germans who sailed over the ocean so they could homestead on volcanic ash that was growing lots of sagebrush. Also, the Ritzville Journal published a story written by Del Allert on what life was like when the Germans from Russia started to scratch out a living in the Ritzville- Odessa area—right where a lot of our ancestors bedded down and started raising kids and lots of wheat.

Sugar and I attended a get-together rally at Ritzville City Park for all those that have Kiesz or Rieker blood flowing through their veins. The events drew lots of relatives that I haven’t seen for a long time. Some had strayed away to far away places and used their brains for other vocations.

While among all those relatives that sunny Sunday, we got to talking about those old farm methods that were used. Also, [we] were reminded that years after the invasion of those big Harrington and Holt combines, a much smaller type of ground powered harvester appeared.

Yes, I do remember those ground hugging dusty machines very well. In 1916, while visiting in the Ritzville district, Billy Kiesz showed Dad his brand new ground powered Deering harvester. It cut a 9 foot swath and took only 12 horses to pull the thing around.—A year later, after tiring of community heading and thrashing outfits, Dad also bought a ground powered Deering from Adolf Spilker and joined Mom’s brother-in-law in the advanced way of harvesting. 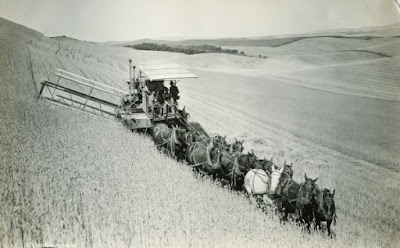 Gilson Family Scrapbook / DigitalArchives.WA.gov
The Gilson Scrapbooks consist of 4 volumes of memorabilia, photographs, newspaper articles and personal letters relating to the history of Adams County. Place names include Ritzville, Cunningham, Lind, Othello, among others. The Gilson Family settled in east Adams County in the years 1890-1910.