Drifting into retirement doesn’t always run smoothly. While playing around down at Lake Roosevelt last fall during Indian summer days, we ran across a tired looking retired farmer and his wife from Mansfield. They were trying to find happiness in retirement by giving Spring Canyon a try. After visiting a spell, we found him depressed.

The poor guy, upon retiring, over did himself by buying an expensive home on wheels. The only retirement desire he had in mind, was to take his seasoned wife back and show her his old home-town in Iowa. Not only was he disappointed about the now dismantled town of his Huckleberry Finn days, but driving that newly purchased land cruiser that far was a chore for him.

He and his spouse had just returned from that nerve-wracking trip, and decided to spend a few days resting up by staring at the lake from a couple of folding chairs. Feeling blue, he felt like they should head south for the winter, so they could make some use out of their mobile investment. “I kind of hate to go,” he stated, “I hear the traffic is pretty bad down there.” 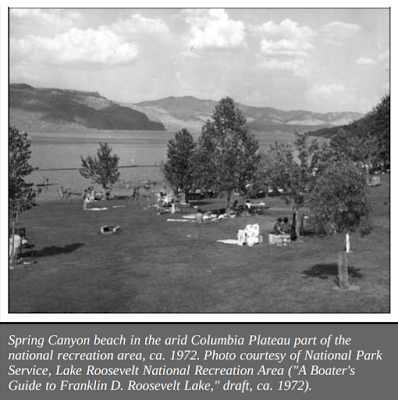