All the Known Carols Were Sung

Thirty-four years ago from this holiday time, things weren’t much different around here, except quite a few old-timers have completed their life cycles, including Ross. New generations have branched out on family trees. Sugar and I, since then, have collected a face full of normal wrinkles. I suppose if we lived in China, we would be taking in their traditional celebration. Right here we have a double feature going for us - Santa and the Christian celebration.
Wherever a person lives, early environment leaves an impression on the memory pattern. It is quite easy to recall things. The year 1947 found us participating in a Christmas program that the country church on the hill put on. Three-fourths of the church population had a part in the program. Pieces about Santa and the Christ child were given to kids up to five feet tall. Anyone that had inherited any musical skill was allowed to do his or her thing. The closing part of the programs was the traditional Chrismas story. To make the final scene more realistic, a silver star was pulled across on a wire to help guide three guys in robes to a mini-manger.
When Christmas was only hours away, the Rocklyn hill church bunch attended a Christmas Eve program at the Evangelical Church in Harrington. After exchanging holiday greetings following the program, brothers and sisters of the Ed Mielke family rounded up some singles with the idea of caroling in the wide open spaces. Sugar and I furnished part of the transportation and were used as spare singers.
That Christmas Eve happened to have been one of those cold, clear nights with lots of snow. Too much caroling, and getting stuck, made it past midnight before we got to the Wade Adams ranch. The family had just returned from midnight Mass. In the warmth of their home we figured it was worth the risk to try and make it out to Ross Parsons’ shack. After all, Ross was getting stiff from old age, and maybe caroling would wake up his eardrums and make him feel good all over.
Still on a high from exercising our vocal chords, we left for the sparsely traveled road that led to the Lake Creek country. After churning and slipping, we made it to Parsons’ private lane. From there on it was a walk-in trip.
His unpainted shack stood out like a dark, ghost-like object in the moon-lit snow. After lining up in choir arrangements, carols rolled out over that desolate place. If Ross had been a religious man, he would have thought the angels were coming to take him to a shinier place.
All the known carols were sung, and still no sign of Ross. When the Star Spangled Banner was suggested, a flicker of light quivered through the small window, as he placed the chimney on his lighted lamp. Though he looked surprised and bewildered, he seemed pleased that we had put on such a spectacular for him. Ross did know it was Christmas time, because a long nail held calendars.
Walking back to our cars we realized that all we left Ross was a memory of Christmas carols that penetrated his shack. No one thought to bring him a present or something to eat. Bread, sow belly, coffee and potatoes can be quite monotonous.
Distant neighbors and relatives were always concerned about his welfare, and often left some tasty goodies. Eventually he just became a character in his own right. Ross was the last settler around here to live all his adult life on land that the government gave away.
"Christmas Pays Visit To Rocklyn Loner " Kik-Backs, page 76, part 2 (previous)     (home)     (thread) 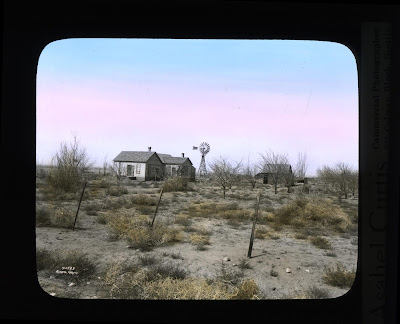