The Doctor Took Dad for a Ride

The first automobile I remember seeing was when sickness sent mother to bed. When mom refused to eat chicken soup, dad called in on our newly installed phone line and told the doctor to come out and see what’s the matter with mom.

An hour later a cloud of dust appeared as Doctor Adam drove up to the porch. He was driving a large looking, rather top-heavy car, that held his wife and a friend. After a quick visit to see mom, the doctor left the house in a hurry. Since doctors are people too, he was excited to show dad all the features his new car had. After a close inspection, the doctor took dad for a ride to Rocklyn and back.

Since we were pasturing his wife’s retired saddle horse, Doc Adam and his wife extended their stay by walking out to the pasture to see her old four-legged transportation. Because mom wasn't in such a hot condition, the doctor went in the house before leaving, to check her over for the second time. It was like getting two [house] calls for the price of one. 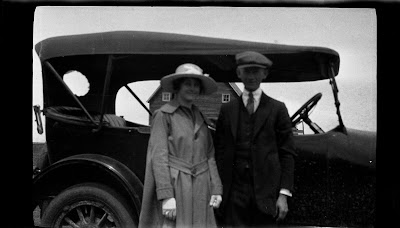