It Does Sound Yukky

The early settlers around here must have been well read. There was no excuse if they weren't. Seventy-seven years ago. the Lincoln County Times was delivered to homes throughout Lincoln County for only $1.50 a year. If you were really hooked on reading, for 50 cents extra a year, the Times would see that you got the twice-a-week Seattle P.I.

In the days of cheap newspaper reading, they also had a cure for cancer. Wonder what happened to the cure. An ad read: "Cancer cured without pain, knife, inconvenience. or leaving home. The Mason treatment endorsed by the International Medical Congress and prominent physicians to be the only actual cure. All other methods are acknowledged useless."

Speaking of physicians, Davenport had its first inventor doctor scads of years before Dr. Thompson applied for a patent on his ’Washington Lighting Sticks.’ Old Doc. Whitney was quite a guy. He practiced medicine here around the turn of the century. His logical approach to health sold quite well among the early Davenport settlers. He figured that the mop and the carpet sweepers were the worse spreader of diseases.

In an article. Dr. Whitney made this statement: “If you have a carpet sweeper, look it over and you will find it filled with hair, dust, lint, etc., and all these make it one of the best places for germs of all kinds to grow, and this is what you are sweeping your rugs and carpets with daily.

“You have a case of cholera, typhoid, diphtheria, scarlet fever, or any of the germ diseases that are deposited on the floor from patient, either from the bowels or sputa. The mop is used to take it up. and when you want to mop your kitchen or dining room, this same mop is used, so we are spreading germs of different kinds all over our floors.”

It does sound yukky doesn't it? The doctor went on to say, “Would you allow your children to associate with people that had never taken a bath? Has your carpet sweeper ever had one? And still you are using this daily and letting your children associate with it. You are inhaling its dust, taking in the germs, and inviting all kinds of disease to yourself and family...

“Take consumption for instance; how often do we see several cases in the same family stricken with the disease, one after another. I now have cases under my care that I firmly believe have been taken from the floor or carpet. Think of the eczema of the hands which the good housewife has contracted by wringing the mop.

“This winter, while thinking the subject over, I invented a mop and sweeper that you can sterilize, or boil without injuring neither floors, carpet or sweeper. You can use strong lye, or boiling water, take it all up clean and dry and wear your white kid gloves and not soil them. It will take the dirt out of every crack on the floor, and even out of the pores of the wood. Run this same cleaner back over the floor to take up all the water and dirt, no dust to inhale. You can also sweep your floor when dry. The casing of this cleaner is made of solid metal, not a seam to hide a germ; the brush is made of the best bristle attainable. It’s a brush you can’t injure, or scald with boiling water from your teakettle. You have it always clean. On the end is a scrub brush which by reversing the cleaner adapts itself to the floor.

“I am having a carload manufactured in Cleveland Ohio, and they will be sold by agents only. So when one calls on you treat him or her courteously, let them show you how it works, and convince yourself of its merit. They are not expensive, and I am confident no home will be without one. I have also patented the same cleaner on a larger scale for a street cleaner. It will clean a street and not a grain of dust will escape, deposit it in a large box, and when full can be dumped or emptied, wherever desired. No dust to be deposited on the sidwalks or window fronts. I have named it “The Sanitary Floor and Carpet Washer.”

Even though it was a good idea, there are no records whether Dr. Whitney’s scare tactics ever sold very many of his germ chasing floor and carpet washers. His super street cleaner model wasn't ever a big hit. The blowing winds kept the streets clean enough to suit most city councils.

Inventor Doctor Whitney saw most of his patients in their homes. It’s been quite a spell since doctors came out to the ranch to see sick people. Early day doctors only had to toss a little black bag and a road map into their rigs. Nowdays it would be quite a chore to lug all their modern equipment around from the clinic. 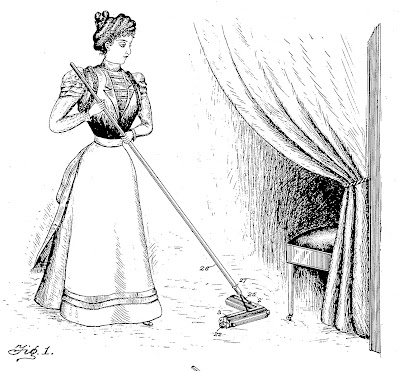 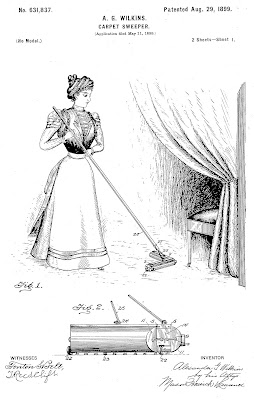 Patent No. 631,837, dated August 29, 1899
To all whom it may concern:
Be it known that I, ALEXANDER G. WILKINS, a citizen of the United States, residing at Meadville, in the county of Crawford and State of Pennsylvania, have invented certain new and useful Improvements in Carpet Sweepers; and I do hereby declare the following to be a full, clear, and exactdescription of the invention, such'as will enable others skilled in the art to which it appertains to make and use the same.