Grandpop Was So Happy

Kik and his waifs were the first Germans to arrive on Rock Creek. The Irish beat him there. They included the Murrays, Brislawns, Belfrys, McCafferys, Woods and McGreevys. The farming type of immigrants started pushing into Edwall country soon after, and included Mielkes, Polenskes, Krones, Scheffles, Kintschis, McPhersons and the Minkles, from Wallula.

Santa Claus came a few days early that year, when Dr. Clowe sent an old prospector on a horse up to Kik's cabin, with four red tin horns and a large jar of horehound candy. The Krones made it possible for Kik and his brood to have their first real Christmas. Kitty and Sally pulled a sled-load of excited little ones through a wilderness of snow. When the Krones’ cabin came into sight, their father told them to blow their red horns. Blow they did. The horses ran away. The sled turned over, breaking a runner, and the little ones landed in the snow. Their father spent the rest of Christmas day trying to catch Kitty and Sally, while the children walked to the Krones’ house.

“When we walked in,” my dad told me, “we smelled pork sausage frying. I’m sure that I never in my life have smelled anything as good as that meat cooking. To this day I often think of that Christmas long ago, when we entered the Krones’ cabin for Christmas dinner. Mrs. Krone also served sourdough bread.”

The old double-barreled muzzleloader was put to high use that winter at Sassin. When the children got tired of eating sage hens, grandpa would aim his shotgun at some jack rabbits.

After Christmas, a cow was rounded up from somewhere, and wheat was boiled for breakfast. For light, potato candles were used. These were made by carving a hole in a raw potato, then filling it with grease. A stick that had been wrapped with a rag was stuck into the spud; it was lit by a sulphur match.

Boy, it sure was a blessing when spring came. Out of cash, grandad got a job staking out claims for the government. When he was gone, he turned his children out in the yard. The cabin worked as a brooder house. During the first two years, he would drive down to Walla Walla for supplies and to pick up his mail.

Later, Colfax became the trading center. During this period, his children invented a language all of their own. I was barely able to swallow that yarn, until I heard my dad and his oldest sister carrying on a conversation in their non-patented language. Long after, a schoolhouse was built and these secret coded youngsters used their gibberish for private conversations.

My pop and his brother had the honor of setting the largest prairie fire known, for their size and age, wanting to burn out just a small patch of dry bunch grass so Kitty and Sally could have some green dessert to chew on. Those two did have good success in starting the fire but stopping it became too much of a problem. The boys took their pants off and tried to whip the fire out, but the pants proved to be a poor substitute for a fire engine. The prairie burned a ten mile wide swath on it’s way to Medical Lake, where it stopped by itself. Not wanting a licking, they told their dad that the devil came out of the woods and set the prairie on fire.

As time passed, Grandpa was able to get quite a bit of the virgin soil turned over. After five years, the children’s growth left less space between the beds and the table, so he nailed a lean-to on the log house.

By now the railroad was pushing itself out West. The company’s brains in the east picked Sprague, instead of Spokane, as a place to fix their broken-down steam locomotives, so that called for the construction of round houses. Sprague was fast turning into an exciting frontier town.

Young ladies that wanted to leave home were hired by the railroads to work in their company’s own restaurants out west. Louisa Rux, a young lady from Minnesota, still in her tender teens, beckoned to the call of the railroads, and got a job as a waitress in Sprague. Gramps, on one of his many trips to town, spotted Louisa and soon started having chow where she worked.

Beings this young lady was 24 years his junior, he had tough sledding for awhile. Finally she accepted his proposal. It seemed strange why she wanted to leave all the glitter Sprague had to offer at that time, and exchange it for a middle-aged guy with four rough-necked kids and a cabin with only a lean-to.

Grandpa went on a big “high” and threw one of the biggest wedding celebrations I ever heard of. By this time a lot of future farmers had settled around the Kik place. A dance floor was nailed together near the house for the wedding party that didn’t get turned off until three days later. The neighbors furnished the food, but Gramps had to kick through with the beer. That seemed to be a must in those days.

All of the young folks that attended the celebration became lasting friends. Later, the Kleins, Kiks, Bursches, Ruxes, and the Fritsches intermarried and became one clan.

Grandpop was so happy about his conquest, that he invited his bride’s family to come out west to the promised land. That fall the train had a train-load when old man Kik’s in-laws pulled into Sprague. They brought everything with them except the farm. The human cargo and all of the valuable stuff filled up half of a passenger car, which included Carl Rux, his wife and five offspring. The cattle rode in a corral-like car with a roof on it, followed by three flat cars full of farm machinery.

There were no vacant houses standing around in that vast Edwall virgin territory, so the Ruxes were willing to semi-hibernate with the Kiks for the winter. The seven piled in with the six cabin dwellers. Privacy went out the window that winter.

A let-down ladder made it possible for all the boys to sleep up in the boarded-up rafters. For Christmas, the young folks made their own play money out of scarce slips of collected colored paper. The rare purple color had a highly fluctuating value. This legal counterfeit money was divided evenly among nine juveniles. Charlie, the whiz-kid from Minnesota, became a capitalist. He owned a jackknife and was able to carve out toys and sell them to the rest of the children. Inflation ruined their money when a flood of colored paper found it’s way up from Sprague.

While the winter winds were howling outside and the children were raising hell, old Grandpa and his father-in-law were planning for spring and making verbal deals. Machinery was scarcer than hen’s teeth. Anyone bringing farm machinery from the east had it made. Grandpa was more than willing to trade his 160 acres of timber claim to his father-in-law in exchange for his header, his chopmill, and a set of harnesses.

When the spring of 1888 rolled around, the Ruxes were able to build a farm of their own.

The next year the scattered settlers built a small schoolhouse. Lydia Hemmersmith, who only had a fifth-grade education herself, was the first Sassin school teacher. School days only lasted for three months a year, causing happy vibes among the pioneer children.

My pop’s oldest sister never went to school. Dad was 12 years-old before the schoolhouse was finished enough to open its doors. He quit when he was in the third-grade. Having to shave was an embarrassment to him.

Not too many moons passed when Gramps started up another batch of children from his second wife. After expanding his land holdings by moving to Rocklyn, he up and left his second wife by dying of cancer at the age of 50.

Grandpa probably promised her a rose garden, but all he left his 26-year-old wife was an array of little ones to raise. For survival, her stepchildren found employment or got married. With a restless dream of looking for something better, many pioneers around here reached their goals. Grandpa did not. I still believe he tried. 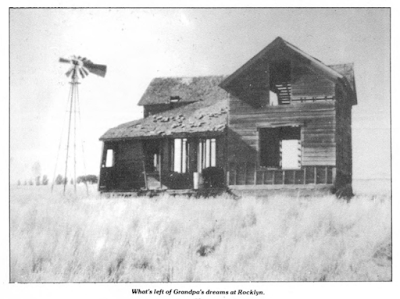 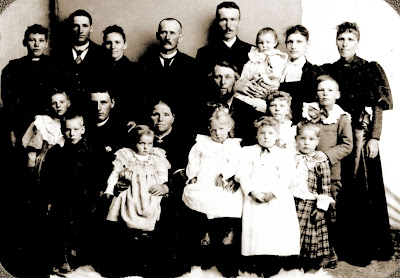 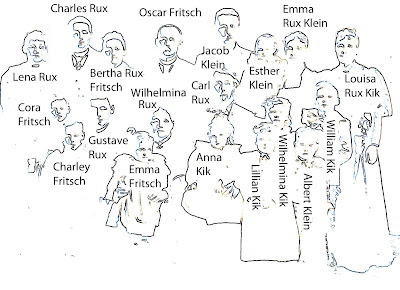 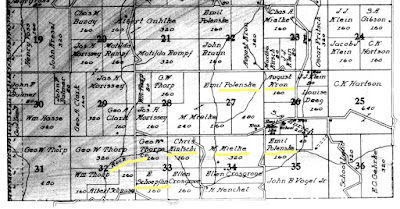 Idioglossia - children who invent their own language (Wikipedia)