A fairly large percentage of the early day young men took the opportunity to find out what life was all about on the other side of the fence. As far as anyone seemed to know, the only drugs that were around in those pioneer days came in liquid form and were readily available in all saloons.

The toxic dope, tobacco, usually was used by our ancestors in the less harmful form to get their kicks; such as pipes, chewing tobacco, and big fat cigars. They even stuffed the stuff up their noses.

When homemade cigarettes came on the western scene, there was a certain amount of pride in the cowboy’s ability to roll his own cigarette while his horse was trying to buck him off. Factory-made cigarettes were generally smoked in those days by city dudes and the more classy prostitutes.

Sure, a lot of those early generation young males kept their noses clean, mostly due to stricter environmental conditions. Those that didn't usually were of no worse quality than the meek. After a little taste of sowing their wild oats, they sought a level of life according to their inherited ability, and became some of our best known Lincoln County citizens.

In 1892, a couple of 15 and 16 year old lads from the Edwall area were fast turning into young manhood. They had already been initiated in the grown-up world of sinful smokers by getting sick on a mixture of dried rose leaves and raw tobacco. They used a clay pipe as their pot machine.

After harvest, old man Kik loaded 20 sacks of grain on a wagon. He told his boys, Dave and Charlie, to haul the grain to Spokane to sell it to a livery barn. The money was needed to pay taxes. Anticipation ran high when their stepmother packed a large lunch.

Noontime the next day, the small town of Medical Lake found the boys resting the team and eating their lunch. Darkness came before the 20 sacks of grain were driven up to the Mission Livery barn in Spokane. The brothers slept under the wagon while the tired horses chewed away all night, converting hay into energy.

When morning arrived, the teenagers received a $20 gold piece and four silver dollars for the load of grain. After downing what was left of the day-old lunch, temptation caused the boys to wander around the tinsel side of frontier Spokane.

Late that afternoon when hunger came over them, the brothers ordered a couple mugs of beer, which would have entitled them to all the sandwiches they could eat. Because their faces looked too slick to be old enough, they got kicked out of the saloon.

A quick check of their trousers revealed they still had the $20 gold piece, but nothing else.

Fright set in, so they beat it across the river to in-law, Jacob Klein’s place. At supper time a good meal was devoured and later the Kik lads were blessed with a safer place to sleep. When morning broke the boys were letting the team take the wagon, themselves, and the $20 gold piece back to Edwall. 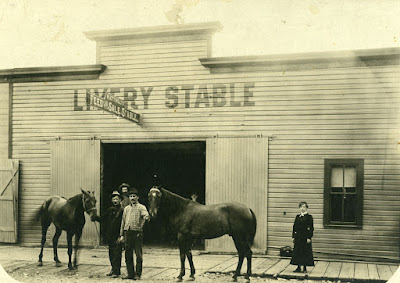 "...sell it to a livery barn."
1896 Olympia, Washington / WashingtonHistory.org