In the beginning, Porcupine differed from the other federally regulated parks in that you could set up 'squatters rights' and stay 'til the snow fell, if you so desired, which many seasonal campers did. Nature so arranged Porcupine that swimming, boating and camping are all done in one spot. It was interesting to see how the habitual ones came as soon as school was out and took choice spots by the water's edge, then stayed all summer, rent free.

Usually Porcupine Bay kids raised there during the choice growing season were a healthy, happy bunch that didn't get into trouble, except for digging sand holes for night strollers to stumble into.

Wally Sowers, a Spokane fireman commuted to work so his family could have the whole season to enjoy summer's dog-days at the Bay. That fall one of his daughters, Jeannie, didn't want to go back to the impersonal life of city schools. She stayed with us so she could enjoy a year of high school life, country style.

With so many semi-permanent residents taking over Porcupine, it finally got to the point where campers were beginning to slide into the lake. There were just too many people wanting to enjoy what the Bay had to offer. First come, first serve. A blockade had to be enforced. When rules of limitation and fees were tacked up, sounds of upsetness could be heard around the Bay. However, most of the old summer squatters realized their free days of stays would forever disappear. 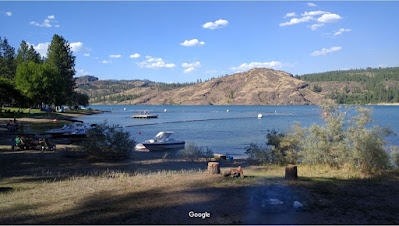 "...swimming, boating and camping were all done in one spot"
Photo from Wake Up Call Production 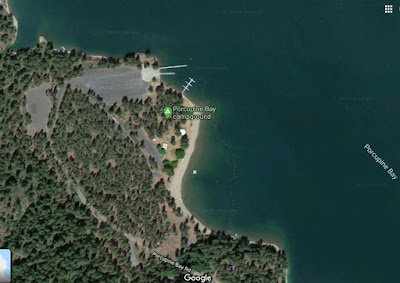 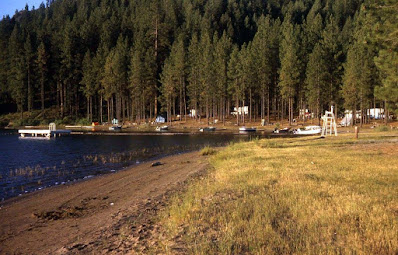