Things that made me happy during long harvest days were, listening to the sickle as it beheaded the wheat, and the steady slapping of the reel bats, (something I'd miss with these new enclosed console models), the noon-day lunch alongside the combine, and stopping to unload so as to get in a brief vocal exchange with the truck driver, usually my sister-in-law or Sugar.

On a hot day, we were usually scantily dressed. Getting sprayed in between loads with the combine firehose, was as refreshing as a jump off a diving board. The wetness was good for at least one hour. Also, when the sky looked like showers, it was always a thrill to see if another round could be made before the clouds called the shots.

When the recent clouds moved in and got a bit of our standing grain all wet and chilly, it caused concern to replace the stress in the excitable, and woke up the meek to reality. Now both are able to walk arm in arm, sharing the same anxieties 'til the last wheat heads get threshed and put away where it's nice and dry. 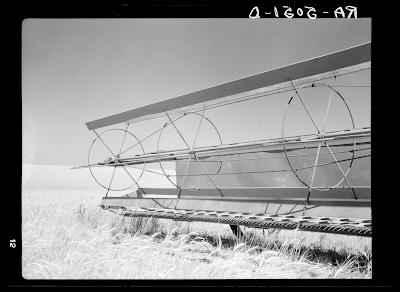