Those Outside Storage Type Farmers

The damp standing stubble is now giving off the smell of fall. For you that are now ready to store your faithful combine or combines, a feeling that another growing season has been taken care of undoubtedly has entered your mind. It's like the words of an old song: "Harvest days are over, Jessie dear." Jessie must have been someone's harvest moon sweetheart.

There are two ways of mothballing a combine for that long storage season. One is to leave it to nature for protection, like some farmers do. However, it does require some instructions to follow. For instance, when the last swath has been gobbled up, look for a spot around the farmstead with soil deep enough so that the combine won't mire down when spring thaw sets in. Be sure the spot chosen is located so you won't run into the machine on some dark night. Take the ignition key out and put it somewhere you might remember where it is the day or two before the next harvest.

Usually, when the last grain stalk has been beheaded by the combine, those outside-storage-type farmers generally don't let the separator bounce itself empty. Some gas is saved by so doing. The other benefit is that it does leave enough straw sticking out both ends of the harvester. This helps keep some of the winter snows from drifting in on the chaff-filled sieves and straw walkers.

A good rain will sprout the scattered wheat that rode the combine all during harvest. The growing seedlings will give the machine a greenish look as they try to protect the combine from the sun. If the combine is properly parked far enough away from the house, you will not have to smell the barnyard-like odor when the straw and sprouted wheat starts to decay. 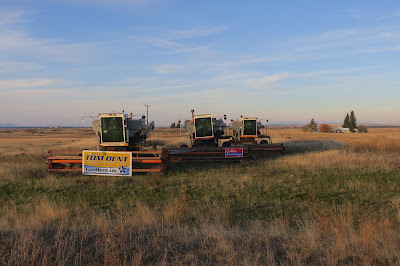 Combines "...put out to pasture"
Walt and Sugar's home is in background. 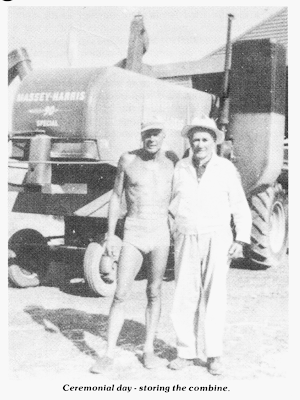 When The Harvest Days Are Over (Jessie Dear.)
Music by Harry Von Tilzer
Words by Howard Graham
Published 1910 by Shapiro, Bernstein & Von Tilzer

[Verse 1]
Near the fireside so cheerful,
Sits an old man sad and tearful,
He is dreaming of the days of long ago,

And in fancy he is roaming,
With his sweetheart in the gloaming,
When he spoke the words that set her cheeks aglow,

By the brook down in the meadow,
In the willows gentle shadow,
There they planned their future happiness one day,

When the sun set in its splendor,
Then his voice grew soft and tender,
As he gently took her in his arms to say.

[Verse 2]
Now the fire once bright is dying,
As he sits there softly sighing,
For his fancy takes him down a country lane,

Past the old schoolhouse he's strolling,
And he hears the church bells tolling,
As he kneels beside his darling's grave again,

All in white she's gently sleeping,
All in black he's softly weeping,
For the one who was to be his wife some day,

But death took him there to greet her,
And in heav'n above he'll meet her,
Like the fire in the grate he passed away. 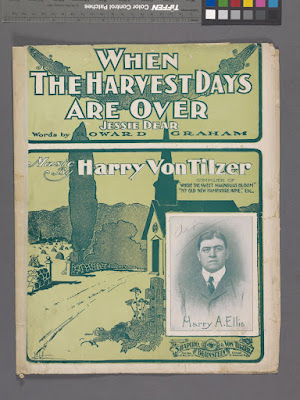