When Horace Mann got all through living, he had this message written on his tombstone: “Be ashamed to die, until you have won some victory for humanity.”

Thankfully, we have people that work for humane causes of the underprivileged. Former news editor, Terri Roloff-Warrington of Wilbur had done her bit for humanity. Terri spent six weeks working in an orphanage, away down in Cuernavaca, Mexico, somewhere south of Mexico City.

It looks like the younger folks throughout the nation are our main hope for social justice. Just attend some of the caring organizations, and you will find out it’s true.

All the recent happenings remind me of the race favoritism that took place over 60 years ago in Southern California. Part of our eight years spent in the south were at Orange. We located ourselves on the edge of a Mexican settlement, where my dad built a house.

When we moved to a so-called California ranch, our house was rented out to a Mexican family. In less than a week, a pure white racist guy put dynamite under our house. It had a long fuse sticking out from under the porch, so our renters could see the danger they were in if they stayed there. Naturally, the family took a powder, and left the house very empty.

A lot of Mexicans lived three blocks from our Orange house. A German guy moved into this neighborhood, and married a Mexican lady with a pile of kids. He was a Methodist minister that loved to sing in Spanish, German, and English.

From a few donations, and a long standing mortgage, a small church of Spanish design was built. The preacher tried to inter-mix the races by inviting the well heeled German folks from the outer circle to join them in worshipping together.

But that idea fell flat on its face, and the church went down the drain. The last time Sugar and I visited that spot of little Mexico, the windowless church was used as a playhouse by little Chicanos.

But the minister did win a victory for humanity. He got a job at the old Fig Nut Food* factory in Orange, and spent his vacation time south of the border helping the poor.

When my mother was buried at Orange, the undertaker warned Dad and I that the plot we chose was located where Mexicans were allowed to be buried. So on resurrection day in that district, the road to heaven will be of mixed race.

Before our sojourn to the south, Herman Bakenhus, a pioneer Rocklyn farmer, moved part of his large family to Garden Grove. Bakenhus encouraged Dad to buy a bare piece of land in that town.

Over at Long Beach, a lot of small houses were in the way of the newly drilled oil well holes. Those houses were available just for the moving expense. Some of them found their way to Dad’s and Bakenhus’ lots, and they were sold to Mexican workers.

It wasn’t long after we left the country, that the Mexicans were kicked out of town to make room for the ’preferred’ race. Recently, a preacher who has a lot of class, moved into that territory. He built a spiritual tower out of glass, that holds many classy people and tourists during his services.

A Spanish friend at Orange by the name of Alphonso Silvanis, did his bit for humanity. He and his family bought a house in the snooty part of town. When his job transferred him to Los Angeles, he let a Mexican family live in his house.

Alphonso told his neighbors they were relatives of his. By the time word got out that they were Mexican, the neighbors learned to love them. So the placing of dynamite under the house was not necessary. 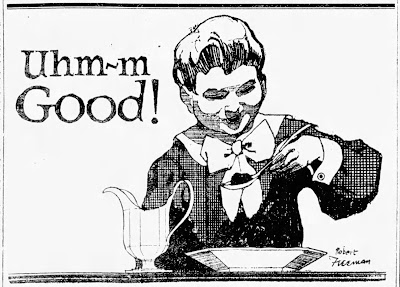 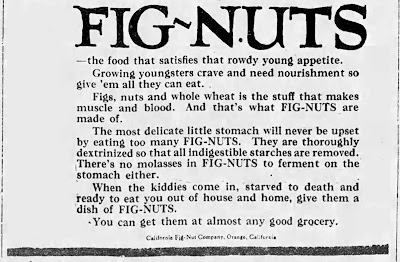 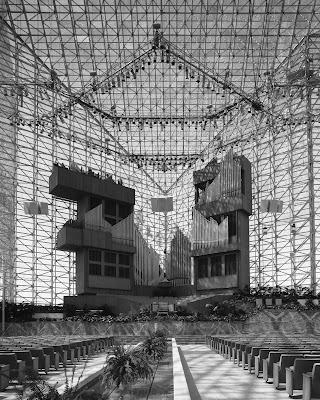 "...a spiritual tower out of glass..."
Library of Congress