All Christians interested in mercenary TV faith healers should read a hard back book entitled ’Give Me That Prime-Time Religion,’ by Jerry Sholes, whose father is an ordained Presbyterian minister. Mr. Sholes is still a darn good Christian, despite getting his belly full of Oral Roberts.

Jerry Sholes was Roberts’ television program writer, and producer from 1975 to 1979. Shock set in when he found out how Oral operated his healing factory. Roberts’ production line is all equipped with a computerized cash flow pattern that boggles the mind! A million dollar home in Palm Springs, expensive cars, planes, and a high-rise throne-like office. Oral now has dreams of completing a huge hospital, so he can give his ‘hot’ healing hand a rest.

Mr. Roberts offered Jerry Sholes a substantial amount of money if he wouldn’t publish his book, [to] which Oral admitted offering. When that failed, someone beat Sholes up so badly in a Tulsa parking lot, that his face had to have plastic surgery.

Oral Roberts doesn’t represent any particular religious denomination except his own money making brand. He did however get a lot of support by milking the smaller churches that were knee-deep in fundamental beliefs. Later, for added prestige, and with the hope of getting a hold of more dough, Oral joined the Methodist church.

A schemer like Oral Roberts would soon disappear if addicted television Christians would go back to their local churches on Sunday mornings. I’m sure every clear thinking preacher would then say, 'Thank God!’ 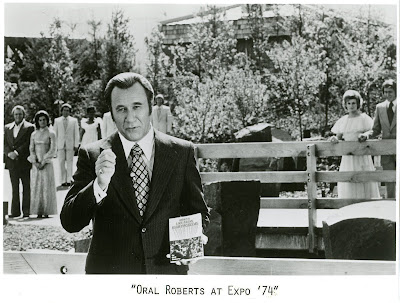 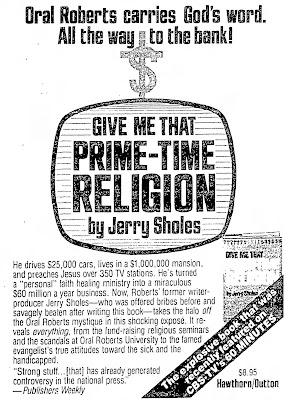 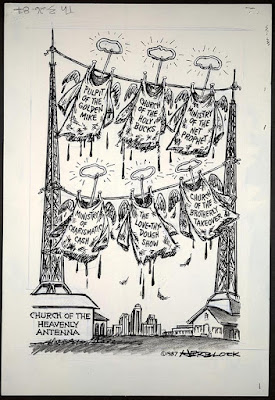