Caught Me with My Pants Down

Just because I don’t go for philandering TV evangelists that rake in big buck dollars, doesn’t mean we shouldn’t love everyone. It was not the lack of love my home town paper had for me that caused them to kick Kik-Backs out of the paper. They just decided on a policy of not letting religious events, good or bad, become part of local history. I just sort of like freedom of expression.

This censorship caught me with my pants down. I began to realize that I would not be receiving free copies of The Times anymore. But I got fooled—I was given a one year subscription, which I appreciate. After all, they did put up with my controversial articles for over 14 years. The Davenport Times had been my home town paper since I was learning the three R's out at the old Rocklyn schoolhouse.

Now, since the freebies are over with The Times, lets let love take over. I knew Walt Wilbur way back when he was scratching for a living, and I was trying to hold onto my farm. I used to spend lots of time with Walt when he was in the old downtown office, discussing and arguing politics. Walt, a Republican, and me, a Democrat, didn’t stop us from having a good ‘merry go round’. Small town freedom of the press was working in those days at the Davenport Times.

We have to have a difference of opinion. What a sorry world it would be if we just stood around and looked at each other. No progress would be made that way.

Thinking back, censorship was a whole lot worse when television first came into our living rooms. We saw Jack Parr walk off his talk show in protest of being censored for using the words 'water closet.' Saying you were pregnant was a no-no, even if you were pregnant in a big way. You were supposed to say, “I am with child” when motherhood was on the way.

Harry Belefonte was making a TV special for the Chrysler Corporation. While singing a duet with a white girl, the camera caught Harry holding her hand. That scene was censored out by a Chrysler chairman. Naturally Belefonte went through the roof. On his way down, the Chrysler bigwig had to apologize for such a segregated action.—Guess we have made a lot of headway at that.

To share some kindness and loving thoughts, I’d like to comment on some good guys that were in the ministry department a number of years age: Rudy Gilbert was the Unitarian minister all during that Vietnam farce. Father Thuey filled the pulpit many times when special social issues were at stake during that time. When Father Thuey became president of Gonzaga, he was too busy to discuss humanitarian problems with us. (Roger Barr, a Davenport minister, reminds me a lot of Thuey because of his devoted concern for social Justice.)

Later, a pipe smoking priest who worked with Gilbert on social issues for the minorities in Spokane, shared the pulpit with Rudy. This priest made this opening statement, “Rudy Gilbert and I are poles apart on theology, but we have a common goal when it comes to working on social justice’ ’...

Too bad that nicotine drug had such a hold on these two fine men. After the services, Rudy with his cigarettes and the priest with his pipe on fire, did a good job of polluting the entertainment end of the church during the social hour.

I don’t know whether smoking wiped out this priest of 20 years ago or not, but several years ago, Rudy became one dead Unitarian from smoking. 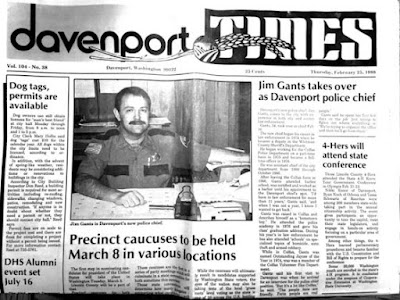