Then You Can See

About a decade ago while visiting with relatives in Hawaii, our hosts, Peter and Paulette Meldahl, (after showing us an excellent time) figured we should take in some night life by eating out. After all, Sugar was entitled to a bit of class. Upon entering a unique place that only had twinkle lights, we were able to see enough to follow a waiter who carried a white towel on his arm. He seated us by a large pole where a guy was playing some music on a guitar.

Beings we didn’t order any booze, we had to live on bread and water for about half an hour. Finally a plateful of something arrived. A small candle setting in a bowl on the table was about to go out, so I couldn’t tell what it was. The taste was foreign, so I substituted some dried figs that I kept in my pocket for such emergencies. The moral is: I’d rather not be in such a classy place and be able to see what I was eating.

But some people can develop a habit of feasting in semi-darkness. Our good neighbor, Elizabeth Janett, lived quite well without the aid of good lights. She had a novel lantern hanging over her kitchen table that didn’t make much more light than that candle in the bowl did. To make matters worse, the base of her lantern cast a dark shadow over the table.

Because the trees were starting to strangle Elizabeth’s house, her husband, Howard, figured it was time to have those aggressive trees cut down to stump size. Elizabeth didn’t like the naked tree stumps, ‘til she got used to all that outdoor scenery that lay beyond her windows. Since trees grow slow, the eclipse comes on so gradually that house occupants are not conscious of the ever disappearing outdoor scenery.

What do you benefit if you don’t give your eyes a chance to see? Some folks with good eyesight build their ranch homes out in the open with large picture windows. Then plant trees so thick around the house, that later makes it impossible to see a damn thing, except a massive curtain of leaves and dense undergrowth.

The same thing exists within cities. The view is about one block in any direction before the buildings block out the line of sight.—Years ago, when Sugar and I were visiting relatives in California, I became depressed. I knew something was wrong, but didn’t know what. Finally I figured out the main problem was that I could not see far enough to know where I was—until Sugar and I drove out to the desert and did some running through cactus plants and desert flowers. Then I felt normal again, as it gave me my correct sense of direction. It made me want to head home, as I didn’t like that feeling of being couped up again in city walls.

Some folks don’t catch all the beauty that their eyes see when out in the open. While jogging out past the Telford rest stop, I ran by a couple of tourists that were changing off driving. The husband got his camera out and took a picture. The wife scolded by saying, "What did you take that picture for? There is nothing to see out there.”

My dear lady, that’s because your eyes have not been trained to register all that vast space of geography that’s out there. Your husband’s camera caught a scene that is filled with beautiful seasonal flowers, lots of bunchgrass [and] also lava outcroppings and sagebrush in all its glory.

Washington, like most of the northwest, cannot be seen well from the inside of an automobile. You have to get out there on foot and physically get into it. Then you can see. 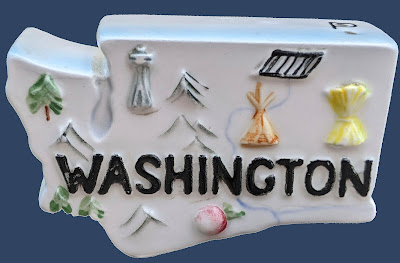 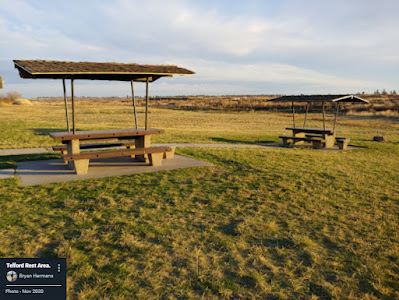