Wading Waist Deep, Even on Sundays

Religion of choice has been, and still is, supplying the spiritual and social needs of the many—though not as impressive as the early day camp meetings that took place throughout the country. In those days it was a time for camping and visiting with the neighbors. We young folks were allowed to go wading waist deep, even on Sundays. Visiting preachers and the district superintendent would bring their customary simple service on faith, with added thoughts for Christians to think about—all done in a serene atmosphere of fellowship. It is sad to see those memorable days disappear, when that imported evangelist, McConnell, moved in with a different brand of religion at Bursches Grove.

Some present day followers of this emotional kind of worshiping, inherited their religion out here at Rocklyn’s camp meeting takeover. The noise and the emotional excitement of by-gone years has disappeared somewhat. They have settled down to a special way of fundamental worshipping—sharing many things with other denominations that were unheard of during those dominating years that split the neighborhood. The wounds are healed and everyone is now acting in an understanding and social way.

Again, leave it to Rocklyn to have the most unusual thing to happen when it comes to religion. A very holy place was dedicated in April, 1987. ‘The Latter Rain Revival Center’ was then open for business. “Come and see what God is doing’" stated an add.

An hour before the dedication I jumped into my car and picked up my sister; then drove to within shouting distance of this holy spot and waited for cars to pile up behind me. None did, so we drove into the yard and found Carl Mielke who had come ahead of us—Where were all the Rocklyn people between Good Friday and Easter? All that showed up at the New Revival Center was a non-believer and two Christians.

What we saw, a book could be written about. The semi-retired evangelist, Clyde came out and greeted us in his black preaching suit. This man of strong faith wasn’t shocked by the extra-light turn out. He said it was God’s will.

Reverend Clyde gave us a guided tour by taking us up on a hill to a newly built chapel, or prayer tower, where he and his wife go to pray every morning. We then walked over to where his future baptismal pond will be constructed. The pond is big enough to baptize about 30 adults atone time, and is located right behind the prayer tower which is leaning quite badly from recent winds—with the help of a brace and lots of faith, it may stand for quite a while. Evangelist Clyde has also laid out a long store front so his future followers won’t starve. He has studdings all strung out in proper spacing, to be assembled as soon as faith and some outside help is available.

A good neighbor built a beautifully decorated cake with lettering that read, “The Latter Rain Revival Center”, but the creator of the cake never showed up. Carl and I took pictures of the cake so they will have something to remember their “open house” event.

Before leaving, Rev. Clyde pointed out his vast planned parking space that in reality can be extended clear out into the Lake Creek country. Really, it’s too isolated a spot for worshipers to travel to.

Clyde has been an evangelist for 30 years, preaching to bums on street comers. He has never made it to the top. I just wish Clyde would quit getting visions. I should have sneaked up to his prayer tower, and in a resonant voice say, “This is the Lord speaking—Clyde you must retire. You have served me well!"

Somehow, I felt sorry for this screwed up guy. It was hard to try to convince him just to revel in his accomplishments. It was easy to find Clyde’s Revival Center, as he had signs posted starting by our lane, so there was no excuse for the poor turn out. 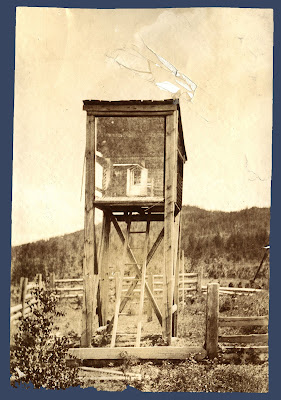 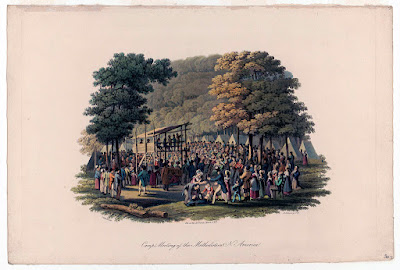