Some Balancing Wheels and Other Gizmos

That wasn’t the only thing that took place around Lincoln County and the rest of the state in the name of religion. John Peterson and his shake down men from Seattle showed up during the McConnell period. Peterson had a heavenly scheme, and it was all down in writing to every investor. For every dollar you gave Peterson, you were to receive $100 back. The invested money was supposed to go for building flying machines that would run without a motor. The perpetual motion power was to be supplied by God. All you had to believe was that God would do anything for his chosen saints.

The reason Peterson failed in his intentions of giving back a hundred fold to his investors, was because God didn’t kick through with the motor power. In lots of ways Peterson had Oral Roberts beat by a landslide. All Oral promised was that something good is going to happen to you if you forked over lots of money to him. Actually Peterson had the same ‘hot line’ to God that Oral is using.

Hard to believe, isn’t it? Well, last week I was able to have a copy made of ‘The Peterson Universal Energy Company.’ Herb Kruger had kept an original Peterson’s Agreement Certificate for all those years—as a reminder of what happened to a lot of money that disappeared forever from our little community.

A friend at a pancake feed in Davenport asked me, “Haven’t you written a little about Peterson before? Yeah that’s right...guess this Peterson guy is sort of a hang up with me. You see, part of the Kik tribe’s downfall came when dad’s sister married Peterson’s son. However, that family connection did give uncle Charley a chance to go to Seattle to take a peek at Peterson's heavenly designed self-propelled flying rig. Peterson first refused uncle the privilege to see ’the thing’. It was locked in a guarded shed—of all things! After all, Noah built his ark right out in the open, and it did float. Peterson’s contraption just set there in the shed while he beat it to Sweden with a lot of the believers money.

What did ’the thing’ look like? According to Charley, a lot of shiny brass tubing of fancy design was rounded into a circle. Leather seats were located between some balancing wheels and other gizmos. Even the Supernatural would have had a job to figure out how to make it fly. 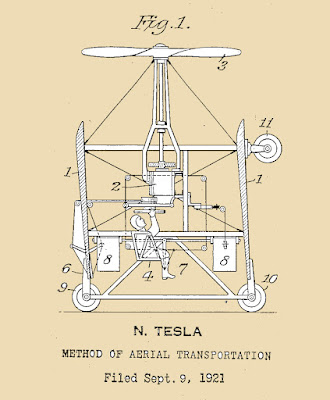 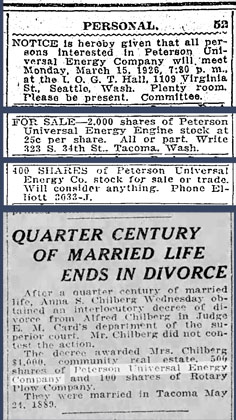