Between the Toilets and a Row of...Oil Pumps

Long time ago, during the Roosevelt landslide years, there was no excitement in the local political races. The courthouse candidates were assured an office if they ran as Democrats. Later, when reason set in, candidates for local office jobs became elected on principle, not party affiliation. After all, they are not going to run the nation anyway. Their jobs are to run the complicated business of managing Lincoln County.

Politics was just as exciting years ago as it is now. It was during the Landon-Roosevelt election time when a lot of small town excitement happened. From the primaries on, each Wednesday night after taking in a movie at the old Talkie’s Theatre in Davenport, a bunch of us political experts would form a meeting at Doc’s Service Station. The ‘meeting of the minds’ room was located between the toilets and a row of hand cranked oil pumps.

It was there that I fell prey to my first and only gambling venture. The evil of betting raised its ugly head when our Republican friends were misled by an unreliable literary magazine poll that was predicting a Landon victory. In those days, Roosevelt had clear sailing. People needed lots of help and got it, to the dismay of the fat cats. 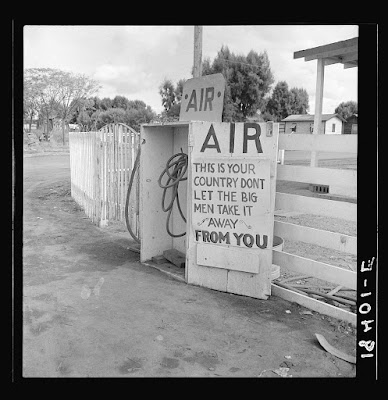