Sort of Tightened Up My Tongue

Frontier justice may have been crude, but the merits were the same as now, although some judges didn’t always abide by their sworn oath. I remember my dad telling about an early day judge, and his son-in-law, who was a lawyer. They got into a dispute, and didn’t take it to court. Instead they got into a downtown fist fight. The two had been drinking causing them to rely on their basic instincts.

Over 50 years ago I saw Will Rogers in a movie role as a country town justice of the peace. Will was scolding a guy for being hauled before his bench for the second time. This pest was making a public nuisance of himself by pestering people on the streets. No it wasn’t over any abortion issue. This guy found other reasons to hamper citizens from moving about freely, so into the clink the justice of the peace had him put.

Our own Judge Willard Zellmer has a much more educated way of handling problems than our early day peace makers had. It’s quite a responsibility to be a judge now, with all the complicated angles that appear on the 20th century scene. You just got to know your stuff. These anti-abortion people could have some excitement going for them while their gold plated, publicity seeking lawyer is testing out the first amendment.

It’s a simple trick for certain religious folks to force their kind of law on the rest of us by saying, “That’s what God said for us to do, and we are going to march here until the Lord tells us differently.” If they are really hearing voices from outer space, it could be that they are hallucinating. In that case they need special psychiatric treatment.

Zellmer’s sentences brought out this brave statement from the ladies, when they said they would rather rot in jail than burn in hell. Even though the flames of hell are for eternity, that divine threat wore off in a few days, and the ladies decided not to start rotting in jail. After getting themselves sprung, they marched down to Davenport and asked Willard what he was going to do about that hellhole of a jail in Spokane.

Now that’s asking too much from a visiting judge that was called as a helper to administer a point of law in Spokane county. There is no legal way that Judge Zellmer could decorate the jail for them. Someone should tell all prospective jail patrons that there are no special catering services available.

Talk about the spreading notoriety of our own country bred judge; that Sunday when Sugar and I completed running in a rodeo run out west at Coulee City, a short type lady spectator who knew who I was, came up to talk. After visiting briefly she said, “Judge Zellmer is not a Christian. If he was a Christian he wouldn’t be jailing those pickets that are working for the Lord.”

Hearing words like that sort of tightened up my tongue. Finally I asked her what church she belongs to. She told me she was a Bible believer. Then I told her I didn’t doubt her beliefs, but was wondering what denomination she attends. She then informed me she attends where the Bible is believed and lived by.

After she sort of put a curse on me for my viewpoints on religion, Sugar and I took a drive through Coulee City’s main street. Sure enough, about a block away from the town tavern, and a saloon stood an old narrow building that had a large sign splashed over the top of its door which read, ‘Bible Believers Meet Here.’

It seems as the years go by there are more branches added to the tree of religion. I wish I’d have told that screwed up lady that Judge Zellmer has been church minded all his life and that his pioneer ancestors were chuck full of religion.

The Judge has been active in about every department of the Methodist church. When I was Sunday School superintendent I taught Willard’s high school class part-time while he was attending law school.

When young Zellmer came back to his home town church, he took over his old class. I was glad he did, as I was drifting toward material thinking and that’s bad for a Sunday school teacher to do. I found Willard increasingly taking an important role as a balance wheel between the young and the old church members when it came to practicing stable religion.

That’s my version of Judge Zellmer’s record as a Christian. I wish I had been better prepared to explain to folks who like to pass judgement on someone else’s Christianity. 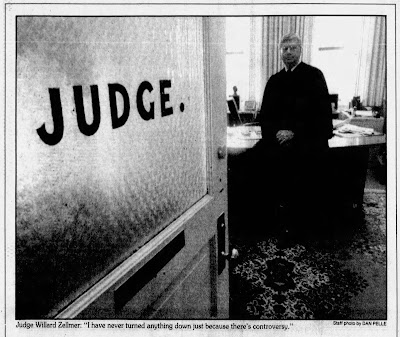 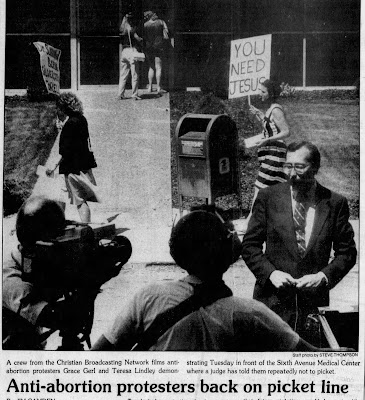 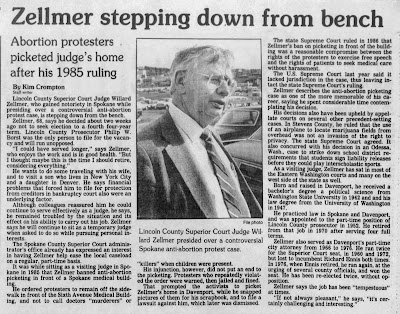