A lot of cars are setting in the dealer's show room, just waiting to be sold. But in the early dawn of car history, the new yearly model car could be outdated by delivery time. My dad’s first car, a 1915 Model T Ford, was put together in August, but didn’t get unloaded from a boxcar in Davenport ‘til May, 1916.

Being able to own a car was a major excitement in that delirious era when Model T's were king. Folks with snooty noses that could afford a car with long hoods that went way out to where the radiator was—got rude. They called those Model T's, the "Tin Lizzie". That name haunted those cute little cars all their productive lives.

Yes, the Tin Lizzie was truly the first car that put the majority of Americans on wheels. They cost no more than a good buggy and a team of horses, and you didn’t have to clean the stable out anymore. They were the compact cars of their time, and were available for nearly 20 years.—Old Henry Ford never put anything on his T frames but convertibles ‘til around 1919. The first enclosed Tin Lizzie looked like an observation cage on wheels; especially the coupes. Ford used the same light suspension for those glass and wooden enclosures. They were top heavy and gave you a woozy feeling when rounding comers.

The early day Western Auto Supply Stores kept those Tin Lizzie’s supplied to the hilt with lots of goodies. For example: A manual starter for Fords was advertised in then-catalog stating, “On a rainy day when the motor stalls, you don’t have to get out in the mud to restart your Ford. Just pull the starter cable from the driver’s seat.” There was some danger in that ratchet type coil that replaced the crank up front—if you forgot to retard the spark lever, you could lose some teeth when your face got slammed against the low slung dash. There were lots of super accessories in those days that turned the Tin Lizzies into power giants as if they were on steroids. Guess you think these new sensational 16 valve cylinder heads on four cylinder cars is something new? Wrong! In 1919, you could buy a 16 valve overhead cam head for that Model T, and then it was able to turn out 97 miles per hour. Of course, you had to take the headlights and the fenders and windshield off and lower your head to attain such speed.

Resurrection of old cars has taken place around here for decades . About 30 years ago, Gene Stuckle went out to our junk graveyard in the pasture, and exhumed our old 1915 Model T chassis, along with the wheels and running gear. The restoring ended when it sprouted a body that had just one seat. After receiving a coat of white paint, it served as Gene and Phyllis’ honeymoon car that took them to Yellowstone Park where they saw lots of things.

In my hot-rod days, I worked over this same old 1915 Model T by stripping the rig down, leaving only the working parts intact. A hacksaw did the job of putting in a cut-out to by-pass the muffler, so the motor would sound powerful when tearing around on desert roads.—In the 1920s, California law must have allowed such goings-on. By fate, I survived, and my sister Ethel and I moved back to Washington in that stripped down rig.

Although these long snooty autos being unloaded at Reardan were not Model T’s that was how Fords arrived in Davenport in 1916. Sandy Keith sold 22 Fords that year.

My cousin, Lentz, didn’t mind squandering lots of money on dirt track racing stuff. Always trying to squeeze more speed out of his Ford racing car. Some competitive drivers were driving big noisy skeleton rigs with nothing to hold on to but the steering wheel.—Lentz’s aim was to beat them.

Lentz’s failure came when he took the back spring off and bolted the chassis to the rear axle housing. When the axle broke from constant solid bouncing, his out of control rig caused another guy who also was driving by the seat of his pants to plow into a spectator, killing him.—That tragic event ended all future dirt track racing that was held between Santa Ana and Newport Beach. 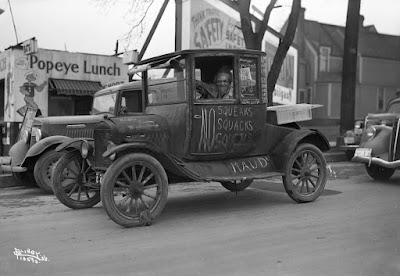