Where Pop Drank His First Near Beer

The most enjoyable was the month we spent at Long Beach with Aunty Lou and Uncle Jack. They loved the beach, so we spent nearly every afternoon on the board walk, including the famous Pike district with its huge roller coaster, and a pier that had a pavilion stuck on the end. Oodles of gaudy shops were everywhere and a large salt water plunge, built with Roman style marble.

It was the place where Pop drank his first near beer and us kids had our first root beer. Cooking seafood could be smelled for blocks in any direction. Here is where we saw our first movies. For 5 cents we could step into a dark hole that had seats for sitting purposes, and witness a 20 minute one-reel flicker comedy—usually featuring Charley Chaplin or Fatty Arbuckle, in ‘way out’ funny situations.

After playing in the sand and running up and down the beach, it was in the cards to go see those short movies that made us all laugh. —A car company set up a black tent on the beach that held about 40 spectators. They showed weekly free movie scenes on what a Dodge car could do. I remember one scene of a cop using an open top Dodge in his pursuit over rocky desert hills, trying to catch a bank robber on a horse that was going like sixty. Although the Dodge had no bumper, it was able to push boulders out of the way, so he could catch the robber, quick-like.

One afternoon while taking in The Pike, we saw movies being made with a hand crank camera. They did it without disrupting the foot traffic. Action began when a lot of young women, wearing above the knee length woolen bathing suits, came running around the comer of a concession stand. They were being chased by cops that were holding billy clubs in their hands, and were wearing tall funny looking hard hats. Later that afternoon, those same bathing beauties came sliding down The Pike’s spiral slide, followed by those same cops.

In February, Pop got a letter from the hired man that the winter was a hard one and he was running out of hay for the horses. The trip back to Portland was uneventful—no train wrecks, however, eating in the dining car was a big event for mom and us kids. Also in those days, you had to be black to be a porter. The porter assigned to our car was a nice fellow that had a racket going for himself. While everyone was snoring, he would take from under the lower birth, all the mens’ shoes and soak them with a coat of polish and put them back. At breakfast time, this porter wait around complimenting the men about the nice looking shoes they had on,—thus collecting good size tips. He also sold magazines and stick candy. When morning set in he collected papers from passing towns, to be sold to news-hungry passengers.

Our final stop was at Portland where Dad’s farmer partner, Ben Fitzpatrick, was spending the winter with his sister. It was during our stay there that we saw our first feature length movie drama. I remember the movie theatre was packed, and we had to set in an overheated balcony. There was a lot of slow acting and staring at each other in the movie—not nearly as entertaining to us kids as those short comedies that we saw at Long Beach.

Soon after our California outing, Davenport was no slouch when it came to opening up a silent moving picture theatre. It held an audience of 260, plus a projectionist and a lively lady pianist. Movie houses in Davenport have an interesting history that’s worth telling about. 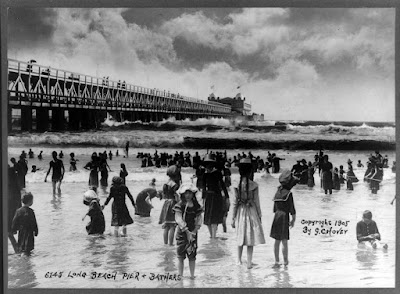 "...a pier that had a pavilion stuck on the end."
Title: Long Beach pier & bathers
Summary: Photograph shows children in bathing suits wading in water at the pier; in background some are using a rope to maintain balance in the water.
Contributor Names: Hovey, Guy Carleton, 1870-1942, photographer
Library of Congress 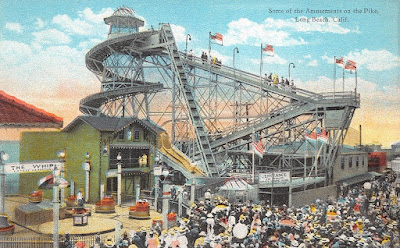 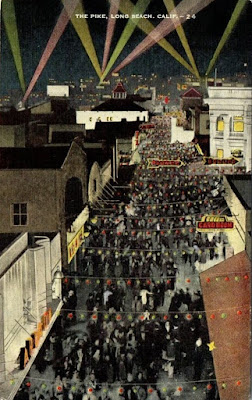