Three years later, came the big test for our Model T. With only six weeks left in 1919, dad and mom decided to take us kids back for another winter’s stay in Southern California. Winter was fast approaching. I’m sure there was no one that year in Lincoln County who had a desire to drive an automobile that far in bad weather, let alone using a Model T to work its way to winter paradise on primitive winter roads.

Dad said, "No train this time" as he wanted his own ‘tin lizzy’ to run around with while at Orange. In some ways, dad was ahead of his time. He loved to camp out, but our Model T was no pickup camper.

The Ford’s fenders and trunk rack were loaded down with a folded 10x12 foot tent, mattresses and stuff like that. Half of one running board held a mini fold-down kitchen cabinet. Us kids’ legs rode high on suitcases. Mother had the only car door that could be opened. For the rest of us, it was “over the top” to get in.

The day we left we drove over to Rocklyn to weigh the works before take off. It turned out to be a scary overload. The Model T was doomed to face lots of chuck holes, clay mud, gravel and snow—at least ‘til we could get to within 500 miles of our goal.

The first day out, we only made it to Wilson creek by hobbling in with a broken rear spring. A guy who ran a repair shop in a barn replaced the spring. Dad was determined not to dump some of our survival cargo, so he located a double action buggy spring and installed it right over the driveshaft housing. A genius idea! That helper spring worked all the way to California.

When we finally got to the Cascades it was an all day struggle for the Model T to carry its load over that wet sticky pass. Dad’s foot ached as he had to hold the low gear pedal to the floor all the way to the summit—a three hour chore. The old saying was; "if a Model T can’t make it up a hill in high gear, you just have to use your foot and shove it up."

The first weekend away from our farm, that I learned to love so deeply, found us camping along the roadside, somewhere between Olympia and Centralia. Mom didn’t think it was right to travel on Sunday, so dad complied with her wishes. While mother was washing the mountain clay out of some soiled things and trying to dry them out between the rain drops, dad and we kids went strolling ‘til we found a shack that had a hermit in it. Even the strange visit that took place between dad and this isolated guy didn’t sweep away the storm of homesickness that was racing through my mind. The country was too loaded with trees and clouds that rained ever since we hit the mountains, and moss was hanging on everything that didn’t move.

We kinda wiggled and slid our way through the outskirts of Portland. Rain was everywhere, we just couldn’t run away from it. With the car top up and the side curtains snapped into place, it gave us the feeling that we were moving in a tent. Even in those days, it was amazing how few people used the roads after we left Salem.

The next day after pulling camp, we came to a fork in the road. The fork that went straight ahead looked like the easier fork to take, so pop steered the Model T in that direction. Soon dad was pushing the low gear pedal for all he was worth, because the road went straight up a mountain side. Little did we know that this was a little used road that wait by an old abandoned mine located near the summit. The road got steeper, slipperier and very narrow—the only way was to keep going.

Finally with no more mountain left to climb, the mining trail wait straight down. Suddenly dad found out the brake band in the transmission was out. Quickly he aimed the Model T at a fallen tree, which bent the front axle way back.

Golly, things really did look bad! It was getting late in the afternoon. Who would ever come up and look at that old mine ‘til spring? We kids got scared and so did mom. What did we do? Finally mom decided to hold her first open air prayer meeting. She asked the Lord to help us, and appeased Him by promising that she would hold family Bible reading and prayer at every beddie time. Mother kept her word for years. In the meantime Dad, with a small ax, chopped a space out of the rotted tree so our transportation could be swung back onto the trail. It was hairy going down that mountain because the front wheels were bent in the wrong direction. When the road turned too sharply, dad had to get out and wiggle the front wheels to where the trail was. Using the reverse pedal as a brake was our only salvation to keep us from spinning off that mountain. At last we found a small town that was setting by the main road. It took a day’s layover to get transmission bands put in. A guy with lots of muscles and pipe wrench got the wheels bent back in proper place.

The second Sunday found us at Ashland. The old camping park was full of wonders. Lithium and soda water springs were boiling around in different places, it was a good place to rest and prepare for that day’s trip of up and over the Siskiyou range. The old tin lizzy found the Siskiyou mountains a little too warm and its water boiled constantly. When we saw a roadside spring, dad would take his foot off the low pedal and get out to drain the radiator, then fill it up with cold mountain water. Those old motor blocks could stand a sudden change of temperature without splitting wide open. It took three radiator drains to make it to the top.

It rained all the next day. Before we got to Dunsmuir, the Model T slid off the road and got itself hung up in a ditch that had slipperier red clay than the road had. Traffic was completely missing, so we had no choice but to set up the tent, using part of the road. (That old road is now buried under a super freeway.) Around breakfast time, a guy driving a team of horses got our faithful rig back on the road. This teamster stated they don’t use cars around there when the roads get slippery, only the travelers that don’t know any better.

When we got to Red Bluff that afternoon, we called it quits for the day and parked our overloaded rig under an oak tree so it could take a good rest. It felt good to dry ourselves out by laying in the sun—the worst was over. The rest of the way was flat. You couldn’t get lost, you just followed the railroad tracks clear to Bakersfield. After three weeks and three days, that old tin lizzy finally got us to Orange.

Before coming back home dad treated the Model T to a new set of tires and tightened up its connecting rods so they wouldn’t rattle so much. We waited ‘til school was out to give the northern roads time to dry off. By taking the right fork in the road this time, the old Model T just kept on feeling the continued breeze of momentum “til we got to Portland.

There was a gas shortage there, so we had to stay over. The Shriners were holding their convention in Portland that spring and they had special priorities for what gas there was in those hand cranked pumps. Finally we found a place where an attendant stuck a measuring stick in the gas tank, then just sold us enough gas to get is out of town. Our Washington license plate saved the day. 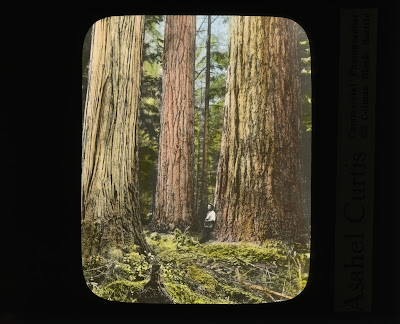 "The country was too loaded with trees and clouds..." 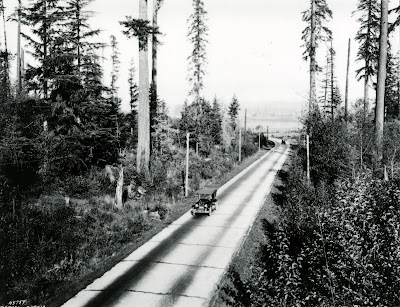 "...moss was hanging on everything that didn’t move."
Asahel Curtis photographs, 1920 - DigitalArchives.WA.gov